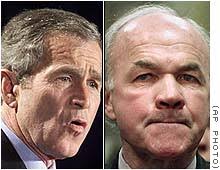 Yesterday's White House press conference came 30 minutes after a jury convicted Enron heads "Kenny Boy" Lay and Peter Skilling on multiple counts in one of the biggest corporate fraud cases in U.S. history (WorldCom technically remains the largest). And how many times did the assembled press gaggle ask press secretary Tony Snow about the historic trial?

Twice. And one was a follow-up question:


Q Tony, the President often mentions corporate crime in his speeches, as recently as yesterday. We've had the Enron convictions now over the noon hour. Any comment from the White House?

Q Can I ask one more on Enron? Does the administration favor compensating the victims now in some way?

And that was it. Of course, today the papers are overflowing with stories -- some quite good -- anaylzing why the government's legal strategy was so good, what the trial missed, and so on.

But the media's silence yesterday points to another sordid piece of the saga: the media's complicity in allowing the White House to disentangle itself from Enron. As the house of cards tumbled in 2001, the Bush team went from embracing "Kenny Boy" to shrugging Mr. Lay off as a mere "supporter" that Bush happened to meet in 1994 (and just happened to become Bush's "#1 career patron," donating $140,000 for his state and federal campaigns).

The media (mostly newspapers) would throw in a story about Bush and Enron here and there, but most (especially TV networks) let the White House spin of "Ken who?" slide.

Journalists are reluctant to call anything a lie. This was only magnified in the wake of 9/11, when the media apparently decided its role was to genuflect to Bush's every pronouncement and let things pass for the sake of national unity.

But if there was ever a time to say a president wasn't being honest, this was it. For example, Robert Parry outlines three specific ways that Bush and the White House were still very much connected to Ken Lay and Enron as the scandal unfolded:

*** Bush personally joined the fight against imposing caps on the soaring price of electricity in California at a time when Enron was artificially driving up the price of electricity by manipulating supply. Bush's resistance to price caps bought Enron extra time to gouge hundreds of millions of dollars from California's consumers.

*** Bush granted Lay broad influence over the development of the administration's energy policies, including the choice of key regulators to oversee Enron's businesses. The chairman of the Federal Energy Regulatory Commission was replaced in 2001 after he began to delve into Enron's complex derivative-financing schemes.

*** Bush had his NSC staff organize that administration-wide task force to pressure India to accommodate Enron's interests in selling the Dabhol generating plant for as much as $2.3 billion.

All these dirty dealings received passing notice in the press, but were grossly under-reported. More importantly, they were never used to challenge the White House attempt to wash their hands of Lay and the Enron scandal.

Business ethics teachers across the country are using the Enron verdict as a critical object lesson in their teaching. I can only hope journalism schools are doing the same.

Big Energy's outside spending in North Carolina: Who benefits?

Special Investigation: Who's behind the 'information attacks' on climate scientists?