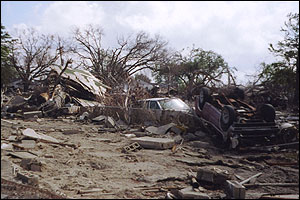 We're back in New Orleans for the Institute's Gulf Coast Reconstruction Watch project (check out the new website, still in progress). It's been 283 days since Katrina hit, and it's always striking to see just how much still needs to be done.

This evening, we attended a meeting of the interesting neighborhood planning process the city has adopted. It's a decentralized effort, with neighborhoods banding together to create proposals for their own revitalization. The approach definitely has the advantages of getting citizens involved. It also is chaotic, and has led to problems such as neighborhood groups overstretching their territory and attempting to "plan" for other communities.

There's also a fundamental problem with any rebuilding process that claims to come from the people, but excludes the thousands of New Orleans residents who haven't come back. As an organizer for the People's Hurricane Relief Fund said at tonight's meeting, "I've been to all sorts of planning meetings, but it seems that many of them haven't written the first chapter of the book: getting our folks back home."

And that question goes back to federal leadership. The reason people aren't coming back home is because, in many communities, a lack of jobs, schools, health care, and other basic necessities make return difficult to impossible. With resources, leadership and creative thinking, many of these problems could have been solved by now. But that's not the kind of leadership we have in Washington now.