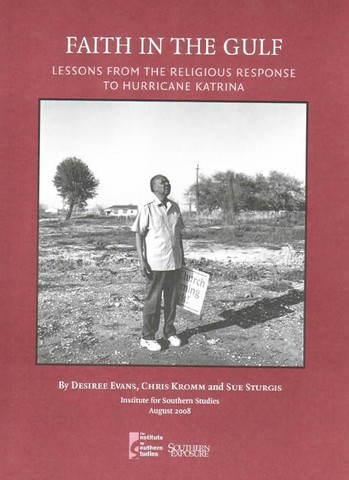 Lessons from the Religious Response to Hurricane Katrina

After Hurricane Katrina struck three years ago, faith and religious groups mounted an unprecedented response that made them the go-to resource for tens of thousands of storm victims.

Now, as New Orleans and coastal Mississippi struggle to rebuild, the expertise, resources and commitment of faith groups will be an indispensable ingredient to the success of long-term revitalization of the Gulf Coast.

Those are among the findings of "FAITH IN THE GULF" [pdf] a new report released by the Institute for Southern Studies.

The study, the largest to date on the religious response to Katrina, also finds that faith-based efforts can't replace the central role of government in Gulf rebuilding, but they can be a valuable catalyst and model for federal, state and local policy.

As the Right Reverend Charles E. Jenkins III, Episcopal Bishop of Louisiana, said in a foreword to the report [pdf]:

"The Gulf Coast was dealt a merciless blow from two hurricanes in succession, and yet it has also been transformed by the boundless energy and generosity of strangers from far and wide. We are three years on from Katrina and Rita and the needs are still here, and the faithful are still coming."

Read more on the Institute blog here. For a copy of the full report, visit here [pdf].

One Year After Katrina