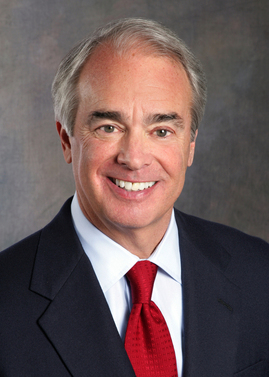 President-elect Barack Obama is expected to announce his pick for Energy Secretary as early as this week -- and Duke Energy CEO Jim Rogers (photo at right) may be on the short list, the Washington Post reports:

There's no shortage of names floating for energy secretary, a job where the majority of the workload in the past has been dealing with nuclear waste, nuclear weapons handling and the various nuclear laboratories. Even so, a cast of luminaries have been mentioned, including Duke Energy executive Jim Rogers, former Energy Department official Dan Reicher, former top Clinton White House environmental aide Kathleen McGinty, FedEx chairman and Republican backer Fred Smith, New Jersey utility chief executive Ralph Izzo, and Rep. Jay Inslee (D-Wash.).

The possibility of Rogers setting the nation's energy policy has raised the hackles of environmental watchdogs, who are fighting North Carolina-based Duke over its plans to build a heavily polluting coal-fired power plant at its Cliffside facility west of Charlotte. Those plans experienced a setback earlier this month when a federal court ruled that the company wasn't doing enough to control hazardous air pollution from the plant.

Duke has also been wrangling with environmental and consumer advocates in North Carolina over a proposed energy efficiency program that has been criticized for saving little energy while costing consumers dearly.

According to a statement released by the N.C. Waste Awareness and Reduction Network:

Rogers would not be "change we can believe in."  As head of one of the largest U.S. power companies, Rogers' idea of change is finding creative ways to "green-wash" while building coal and nuclear plants and limiting energy efficiency and renewables.

N.C. WARN is urging supporters to express their opposition to Rogers' appointments by calling the Obama transition team at 202-540-3000 or by e-mailing comments through the transition's website.

Obama's flip-flops on money in politics: A brief history

What have Obama's first 100 days meant for the South?