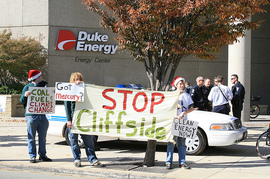 This week has brought a mixed bag of news for environmental advocates fighting dirty coal projects across the South.

Handed down Tuesday by a federal district court in Asheville, N.C., the judgment requires Duke to utilize the best available technology to control toxic emissions from the massive new plant -- or else halt construction.

"The court confirmed that building a coal-fired plant without proper controls for mercury and dozens of other hazardous air pollutants is wholly unacceptable," said attorney John Suttles of the Southern Environmental Law Center, which along with the Natural Resources Defense Council represented the National Parks Conservation Association, Sierra Club and Southern Alliance for Clean Energy in the lawsuit. "This decision about Duke's North Carolina power plant should have people around the country breathing a big sigh of relief."

The court rejected Duke's arguments that federal pollution controls didn't apply to the new Cliffside facility and that the company could substitute voluntary efforts for the Clean Air Act's mandatory cleanup requirements.

Patrice Simms, an attorney with NRDC, says the decision has national implications since other coal-burning power companies are following Duke Energy's lead in trying to skirt pollution-control requirements. SACE Executive Director Stephen Smith called on Duke CEO Jim Rogers to halt construction of the coal plant and instead focus on energy efficiency and renewable energy.

"The EPA's decision is a slap in the face of Appalachian communities, which have already endured enough injustice from mountaintop removal," said Vernon Haltom, co-director of the West Virginia-based Coal River Mountain Watch. "My home and thousands of others are now in greater jeopardy."

A 1983 regulation that prohibited dumping the leftovers from mountaintop removal mining within 100 feet of streams was opposed by the coal companies -- and rarely enforced by regulators. The Office of Surface Mining has been pushing to scrap the rule.

The White House Office of Management and Budget also approved the rule change this week, and the Department of Interior plans to finalize it this month after briefing Congress. It will take effect 30 days after that.

Besides being fought by environmental groups, the rule change was also opposed by Kentucky Gov. Steve Beshear and Tennessee Gov. Phil Bredesen, who called for more environmentally responsible mining practices.

President-elect Barack Obama -- who criticized mountaintop removal mining during his campaign -- will have the power to change the rule once he's in office.

* * *
But there's also a some good news regarding mountaintop removal mining: According to an announcement made yesterday, Bank of America will phase out financing for companies whose predominant form of mining is mountaintop removal.

"While we acknowledge that surface mining is economically efficient and creates jobs," the company said in a statement [pdf], "it can be conducted in a way that minimizes environmental impacts in certain geographies."

The Rainforest Action Network, which has been pressing Bank of America and other financial institutions to end financing of mountaintop removal mining as well as new coal plants, hailed the decision as "a giant leap forward."

Job growth: good news and bad news for the South