Georgia voters must be feeling deja vu. Not only are they voting again in the much-anticipated runoff election between Sen. Saxby Chambliss (R) and challenger Jim Martin (D). They're also seeing the same campaign themes they heard last time Chambliss ran for office in 2002.

Chambliss, you'll remember, earned infamy in the 2002 Senate race when he aired a notorious attack ad [video] that linked his Democratic opponent Max Cleland -- a war veteran and triple amputee -- to Osama bin Laden. Even John McCain described the ad as "[W]orse than disgraceful. It's reprehensible." (Although that didn't stop McCain from going to Georgia this month to campaign for Chambliss.)

Thought 9/11 fear-mongering was over with? Think again. As Creative Loafing reports from Atlanta, last week the National Republican Trust PAC ran another set of attack ads -- only this time, instead of linking Democrats to bin Laden, the chosen associate is 9/11 hijacker Muhamed Atta.

Below is a mug shot of Atta from his Florida driver's license: 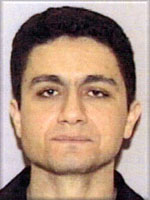 Now here's a frame from the Republicans' ad attacking Martin, focusing on the perils of Democrats and their supposed pro-immigrant agenda. Look who makes an appearance at the top center: 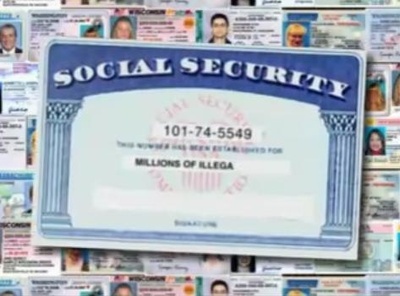 In case you can't see it, here's a close-up shot:

In case there's any mistaking the intent of the ad -- to stoke fear -- here's the voice-over that accompanies the ad:

Barack Obama's just one Senate vote away from total control. He'll give 12 million illegal aliens citizenship, Social Security, even driver's licenses. Don't believe it? Just ask him.
[Obama video clip:] "We need to offer those who are willing to make amends a pathway to citizenship."

And he'll pay for it by crushing new taxes. A vote for Jim Martin is a vote for Obama's radical agenda. Say no to Jim Martin and stop Barrack Obama.

The National Republican Trust PAC is responsible for the content of this advertisement.

As Creative Loafing notes, the ad's content is confusing on several levels. For example, Georgia state law already allows non-citizens to hold driver's licenses. But acknowledging that fact would mean taking out the Atta photo -- and exploiting the 9/11 tragedy has worked so well for Chambliss in the past.

Americans disenfranchised for crimes would be able to sway Senate races

INSTITUTE INDEX: The continuing toll of 9/11