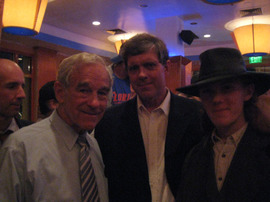 A white supremacist activist is threatening to sue a Florida county Republican Party for refusing to allow him on its executive committee after he was elected to the post.

Derek Black (at right in photo) won a seat on the Palm Beach Council Republican Executive Committee in August. But now GOP Chair Sid Dinerstein is refusing to seat Black, saying he failed to sign a party loyalty oath on time. So did about a half-dozen committee members, whose positions are now in jeopardy, according to the Palm Beach Post.

"I talked about immigration," he said. "I talked about the presidential campaign. That was the biggest issue. This was back in August, July. Most of them weren't happy with (Sen. John) McCain turning out to be their candidate. It did come up a few times that I didn't like McCain."

The younger Black has the support of another former KKK Grand Wizard -- David Duke of Louisiana, who went to Florida this week to conduct an Internet broadcast to support the young man's quest for the party post. Duke accused Dinerstein of having the "chutzpah" to take an anti-democratic position.

The elder Black (center in photo) has a long association with Duke. While volunteering for white supremacist J.B. Stoner's unsuccessful run for governor of Georgia in the 1970s, Black was shot in the chest by campaign manager Jerry Ray, the brother of Martin Luther King Jr. assassin James Earl Ray, over accusations of a stolen mailing list. Black then joined the Knights of the KKK, which was headed by Duke, and went on to work on Duke's failed campaign for Louisiana state senate.

In 1981, Don Black and nine other white supremacists were arrested in New Orleans for a plan to invade the Caribbean island of Dominica, overthrow its black-led government and turn it into a white state. The conspirators called the planned overthrow Operation Red Dog, but the media dubbed it "Bayou of Pigs."

During his three years in prison for violating the U.S. Neutrality Act, Black took computer programming classes that would prove key to his future work. After marrying Duke's ex-wife Chloe, who is Derek's mother, Don Black founded Stormfront in 1995. Derek contributed a children's page that included puzzles, games and white-pride songs.

Already one of the most popular white supremacist sites on the Web, Stormfront got a boost from the presidential win of biracial Barack Obama. The site racked up more than 2,000 new members the day after the election and had to go off line temporarily because of the overwhelming amount of activity.

Don Black, who supported conservative Republican Texas Congressman Ron Paul (left in photo) in the recent presidential election, recently told an Italian newspaper that he wants to create a special interest group within the Republican party "to restore tradition and true white values."