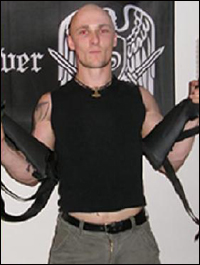 The motto of the U.S. Army is "This We'll Defend." But some members of that force as well as other military branches have pledged their loyalty not to this country but to racial extremist organizations, and a watchdog organization is calling on the Pentagon to tackle the problem.

Earlier this year, the FBI released to law enforcement agencies nationwide an intelligence report titled "White Supremacist Recruitment of Military Personnel since 9/11" [pdf]. Noting that extremist leaders seek to recruit members with military experience to exploit their discipline, knowledge of firearms and explosives, tactical skills, and access to weapons and intelligence, the report makes an effort to measure the extent of the problem:

A review of FBI white supremacist extremist cases from October 2001 to May 2008 identified 203 individuals with confirmed or claimed military service active in the extremist movement at some time during the reporting period. This number is miniscule in comparison with the projected US veteran population of 23,816,000 as of 2 May 2008, or the 1,416,037 active duty military personnel as of 30 April 2008. It is also a small percentage of an estimated US white supremacist extremist population, which, based on FBI investigations, currently numbers in the low thousands. However, the prestige which the extremist movement bestows upon members with military experience grants them the potential for influence beyond their numbers. Most extremist groups have some members with military experience, and those with military experience often hold positions of authority within the groups to which they belong. 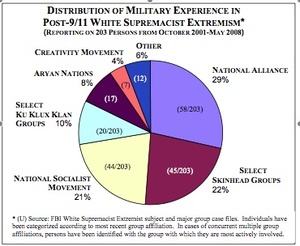 Of the 203 FBI-documented cases of military members with extremist movement ties, the greatest number (58) were involved with the National Alliance, a white-separatist group based in Hillsboro, W. Va. That was followed by select skinhead groups (45), the National Socialist Movement (44) and the Ku Klux Klan (20).

Spurred in part by the FBI's report, the Alabama-based Southern Poverty Law Center recently wrote a letter about the longstanding problem to Defense Secretary Robert Gates, urging him to "enact and enforce an unambiguous zero-tolerance policy against extremists in the military."

SPLC, which has been working to draw attention to racist extremism in the military since 1981, also pointed to the findings in "'Killing a Brown': New Evidence of Extremists in the Military," an article from its Winter 2008 Intelligence Report. Author David Holthouse writes:

For example, one [Army Criminal Investigative Division] report details a 2006 investigation of a suspected member of the Hammerskins, a multi-state racist skinhead gang, who was stationed at Fort Hood, a large Army base in central Texas. According to the report, there was "probable cause" to believe that the soldier "had participated in a white extremist meeting and also provided a military technical manual 31-210, Improvised Munitions Handbook, to the leader of a white extremist group in order to assist in the planning and execution of future attacks on various targets."

The report shows that agents only interviewed the subject once, in November 2006, before Fort Hood higher-ups called off the investigation that December.

Another report, also from 2006, covers an investigation of another Fort Hood soldier who was posting messages on Stormfront.org, a major white supremacist website. One CID investigator expresses his frustration at the muddled process for dealing with extremists. "We need to discuss the review process," he writes. "I'm not doing my job here. Needs to get fixed."

The latest SPLC report comes two years after another it issue titled "A Few Bad Men," which warned that members of neo-Nazi and other extremist groups were continuing to infiltrate the military despite earlier directives calling such activity "incompatible" with military service.

In response to that report, 40 members of Congress led by Rep. Artur Davis of Alabama and Charles Rangel of New York wrote a letter to former Defense Secretary Donald Rumsfeld [pdf] calling on him to investigate and discharge service members who participate in white-supremacist activities. U.S. Sen. Richard Shelby of Alabama also urged Rumsfeld to adopt a zero-tolerance policy.

Unfortunately, the 2006 letter produced no action by the Pentagon. SPLC is hoping Secretary Gates, who recently accepted President-elect Obama's offer to continue in his post under the new administration, will revisit the matter.

(Photo of Robert Lee West, an active-duty airman at Robins Air Force Base in Georgia, posing with Nazi regalia from SPLC's website)

Meet the man behind the Muslim conspiracy uproar