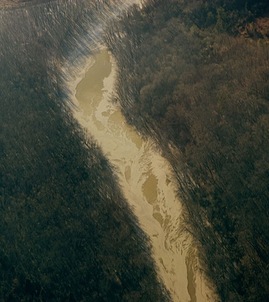 In addition to the disastrous spill of more than a billion gallons of toxic coal ash sludge from its Kingston power plant in Eastern Tennessee, the Tennessee Valley Authority is now grappling with another recent spill of coal waste pollution from one of its facilities.

On Friday, TVA reported an accidental leak of as much as 10,000 gallons of coal waste from a storage pond at its Widows Creek Fossil Plant in northeastern Alabama into nearby Widows Creek, a tributary of the Tennessee River. The pond held what's known as flue gas desulfurization residue -- the material created when limestone slurry is sprayed into smokestacks to remove sulfur dioxide from plant emissions via chemical reaction. The resulting residue is dumped into a holding pond where it is settled out and eventually used to make synthetic gypsum for wallboard and other building materials.

A leak in a pipe from the holding pond resulted in the material flowing into a settling pond that was already filled to capacity, causing an overflow into the creek. The company discovered the leak at about 6 a.m. Friday. It notified federal, state and local authorities and installed booms in Widows Creek and the Tennessee River adjacent to the plant to contain the material, which is contaminated with heavy-metal-laden fly ash.

TVA took samples from the Tennessee River downstream from the mouth of Widows Creek for independent analysis. While the initial set of test results [pdf] show slightly elevated levels of contaminants including aluminum, arsenic and sulfate, they reportedly do not exceed basic drinking water standards. A sediment sample taken to characterize the overflow material reportedly found nothing at levels deemed hazardous. More tests results are expected later this week.

Environmental advocates say this latest spill is yet another example why federal regulation of coal waste surface impoundments is so desperately needed.

"The Tennessee eco-disaster and now the Alabama coal spill have cast a spotlight on what is a very serious national problem -- the existence of under-regulated toxic pollution coal dump sites near coal-fired power plants that pose a serious threat to drinking water supplies, rivers and streams," says Eric Schaeffer, director of the Environmental Integrity Project. "We can no longer afford to ignore this problem, and we certainly can't be content to just sit around and wait for the next Tennessee-style disaster to happen."

The incident also raises fresh questions about how effectively TVA is managing its facilities to protect against environmental problems -- as does another TVA incident that also came to light last week.

On Friday, the Tennessee Department of Environment and Conservation notified TVA that it violated water quality laws when it opened an East Tennessee flood-control dam earlier this month and allowed bottom sediment to flow into the Ocoee River, the Tennessean reports. The sediment was contaminated with heavy metals and other toxic compounds from a former copper mining operation upstream.

The state ordered TVA to present a plan by Jan. 22 to restore the Ocoee to its pre-spill condition.