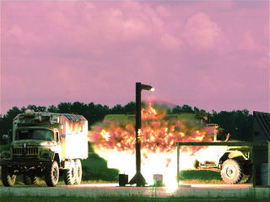 The United Nations Human Rights Council voted last week to investigate human rights violations by Israel during the recent military offensive in Gaza, where a 22-day war killed at least 1,300 Palestinians and wounded another 5,300, many of them children and other civilians. Thirteen Israelis were also killed in the conflict, three of them civilians.

Human Rights Watch criticized the U.N. council's resolution for ignoring violations by Hamas, but the watchdog group also accused Israel of illegal acts of war including indiscriminate attacks and the use of heavy artillery shells in densely populated neighborhoods. In addition, human rights advocates have condemned Israel's use of white phosphorous, a highly incendiary material that provides a smokescreen for troop movements and causes severe burns.

But it's not only the use of heavy artillery and white phosphorous in Gaza that's raising concerns: Israel is also facing accusations of using unconventional weapons that have left victims with hard-to-treat injuries. If those weapons are what some European doctors suspect, cancer is another serious long-term concern for the wounded.

Dr. Erik Fosse, a physician with the Norwegian Aid Committee who worked in Gaza hospitals during the conflict, recently told the British newspaper The Independent that he saw a number of patients in Gaza with unusual lower-body injuries:


"It was as if they had stepped on a mine, but there was no shrapnel in the wounds," he said. "Some had lost their legs. It looked as though they had been sliced off. I have been to war zones for 30 years, but I have never seen such injuries before."

Fosse and his colleague Dr. Mads Gilbert say the injuries match photographs and descriptions of the effects of so-called DIME weapons, an acronym for Dense Inert Metal Explosive. Designed to produce a powerful blast in a small area, the weapons were developed by the U.S. Air Force Research Laboratories for use in densely populated places to minimize collateral damage.

The bombs have a carbon fiber casing that turns to dust upon detonation so they don't produce large pieces of shrapnel like conventional metal-encased bombs. Instead, DIME munitions contain a powder consisting of a dense alloy of tungsten with small amounts of nickel and either cobalt or iron. Tungsten is used because it's chemically inert -- that is, it does not become part of the explosive reaction like some metals.

We've reported previously on the link between the Gaza conflict and the U.S. South, where many of the weapons used by Israel were developed or manufactured. That's also the case with DIME munitions, which were developed by the U.S. Naval Surface Warfare Center in Dahlgren, Va. and tested at Eglin Air Force Base in Florida, according to the Navy League of the United States.

Though DIME bombs were developed in an effort to limit the destruction caused by the initial blast, it turns out they may also cause a kind of slow-motion destruction in the people they injure but do not kill outright: deadly tumors.

The military's own scientists have shown that tungsten alloy presents a serious cancer risk for anyone exposed to it in the form of embedded shrapnel. In a 2005 study published in the journal Environmental Health Perspectives, they report what happened when they implanted pellets of weapons-grade tungsten alloy in rats to simulate shrapnel wounds and then compared them to rats implanted with tantalum, an inert metal, and nickel, a known carcinogen:

What the researchers call "tumor yield" was 100% in both the low- and high-dose tungsten alloy groups. That is, all of the rats implanted with tungsten alloy developed tumors -- a relatively rare cancer of the skeletal muscle cells called rhabdomyosarcoma that quickly spread to the animals' lungs.

The researchers also observed significant changes in the blood of the high-dose tungsten alloy-implanted rats that indicated polycythemia, a condition in which the body produces too many red blood cells. The blood changes took place as early as one month after the rats received the tungsten alloy implants, well before any signs of a tumor.

Fosse has called for following up with injured patients in Gaza to see if there are any cancers that may be caused by the weapons.

The Israeli military has refused to confirm or deny the use of specific munitions, but it maintains that all of its weapons comply with international law. Interviewed last week by Democracy Now!, Human Rights Watch military analyst Marc Garlasco said his group is aware of the reports of DIME use in Gaza but still had no definitive evidence because its monitors weren't being allowed into the territory. If the weapons were deployed there, he said, "it remains to be seen" how Israel acquired the technology.

(Photo of a DIME test from Air Force Research Laboratories via Defensetech.org)

INSTITUTE INDEX: Police use tear gas banned from war on protesters at home