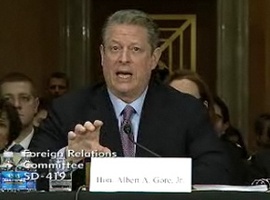 It's been a busy week for climate policy in Washington, D.C. -- quite a change after eight years of inaction on global warming under the Bush administration.

On Monday, President Obama signed his first two presidential memoranda aimed at putting the U.S. on the path to a more sustainable energy policy. The first directs the U.S. Department of Transportation to establish higher fuel efficiency standards for carmakers' 2011 models, while the second allows states to impose emissions limits tougher than the national standard. California and other states had asked permission to do so before, but the Bush administration denied their request.

"Instead of serving as a partner, Washington stood in their way," Obama said. "The days of Washington dragging its heels are over."

Then on Tuesday, the President met with Republican leaders to discuss his $819 billion economic stimulus plan, which contains provisions to promote energy efficiency, renewable energy, clean cars, and a so-called "smart grid" allowing more efficient distribution of energy. The House passed that legislation yesterday 244 to 188 with no Republican votes; it now goes to the Senate where debate could begin as early as Monday.

Climate disruption is a special concern for the U.S. South, as detailed by a report released this month by the U.S. Environmental Protection Agency that found sea levels along the coast of Virginia and North Carolina are rising faster than the worldwide average due to global warming. This puts communities there at greater risk of flooding and also threatens the states' tourism industries, further damaging already-fragile economies.

"Frankly," Committee Chair John Kerry (D-Mass.) said in calling for new policies, "the science is screaming at us."

In his testimony, Gore observed that U.S. reliance on carbon-based fuels is a common thread in various crises we face -- not only environmentally but also economically and in terms of our national security. To take immediate steps to address the problem, he called on Congress to support President Obama's economic recovery plan. Next, he said, the U.S. needs to put a price tag on carbon. While Gore supports a carbon tax, he believes a cap-and-trade approach is more likely to be adopted, and made the case that it should not give away emissions credits to big polluters.

Despite the grim warnings of climate scientists, though, Gore remains optimistic. For one thing, he said, the Obama administration has clearly demonstrated it wants the U.S. to regain its role as a climate policy leader -- in his opinion the only country that can play such a role. At the same time, he observed, there's a much broader international consensus on the need for action.

Indeed, there were no voices of climate-change skepticism at yesterday's Senate hearing, though minority members did use the occasion to promote pet issues. Sen. Richard Lugar (R-Ind.), the committee's ranking Republican, criticized some environmentalists for opposition to genetically modified crops, which he argued would become increasingly important to combat climate-related food shortages. And Sen. Johnny Isakson (D-Ga.) made the case for nuclear power as a carbon-free alternative, prompting Gore to say that while he is not reflexively anti-nuclear, the market has shown the technology won't play an important role in fighting climate change.

But skeptics of man-made climate change have not simply disappeared, as we saw in other climate news coming from Washington this week. Yesterday Marc Morano -- a staffer for outspoken climate change skeptic Sen. James Inhofe (R-Okla.), a major recipient of oil and gas money who has compared the Environmental Protection Agency to the Nazi Gestapo -- released a memo attacking the work of NASA scientist and global warming expert James Hansen, whose prescient 1988 warnings about climate change were discussed at the Senate hearing.

The memo features the comments of Hansen's former NASA colleague Dr. John S. Theon, who said he disagrees with Hansen and appreciates "the opportunity to add my name to those who disagree that global warming is man-made." Theon also insists that Hansen was not "muzzled" by the agency under Bush, despite findings to the contrary documented in an report by the House Oversight and Government Reform Committee.

Should anyone be tempted to think the memo proves there really is no scientific consensus around the reality and urgency of man-made climate change, however, he or she ought to keep in mind the misleading statements disseminated by Morano in the past, and the fact that his boss has been named by actual climate scientists "the most clueless politician talking about climate change."

But the memo does show that politically powerful forces have not given up their fight to maintain the climate status quo. And unfortunately, their efforts to slow the adoption of more sustainable climate policies could prove devastating to us all.

As Gore said in calling for action, "This is the one challenge that can completely end human civilization."

Who pays for extreme weather?