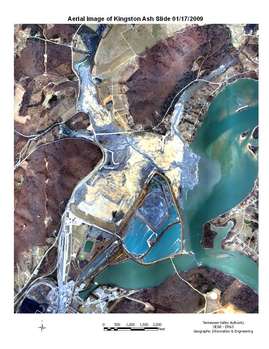 A month has passed since a coal ash waste dam collapsed at the Tennessee Valley Authority's Kingston power plant in Roane County, Tenn. The disaster unleashed the largest industrial spill in U.S. history -- more than a billion gallons of toxic waste in all, 100 times more than was released in the 1989 Exxon Valdez incident in Alaska.

The authorities are still trying to understand the full impact of the spill. A team of scientists from Appalachian State University in Boone, N.C. recently began their assessment of the status of the nearby Emory River, as well as the Clinch and Tennessee that the Emory feeds. They have been collecting samples of water, sediments and fish for analysis, and their preliminary findings are disturbing.

"All of the channel catfish collected just downstream of the spill had at least some ash in their stomach or intestines, but one fish had 34 grams of ash in its stomach, which was about 8 percent of its body weight," said Dr. Shea Tuberty, an ASU biologist. "That would be the equivalent of 13 pounds of ash in my stomach."

Tuberty also reported that two of three largemouth bass collected two miles upstream of the spill zone had ash in their intestines, indicating they had migrated upstream from the ash zone to find cleaner water. The ash contains heavy metals including arsenic, lead and thallium as well as other toxins.

The ASU scientists estimate that the ash layer covering the bed of the Emory River is 12 feet deep closest to the spill site. The ash is two inches deep 3.5 miles downstream and about a quarter inch deep 6.5 miles downstream at the Tennessee River's Watts Bar Reservoir.

The scientists have also observed numerous fish with sediment-clogged gills.

"Fish absorb oxygen directly from the water across their gills," said Dr. Anna George, director of the Tennessee Aquarium Conservation Institute. "If the gills are coated with sediment, the fish will suffocate. This would be like a human trying to breathe in a burning building filled with smoke."

Fish are not the only creatures at risk due to the spill. Humans have also been exposed to the ash and the toxins it contains -- and now experts are raising concerns about the adequacy of the tests that have been conducted so far to assess the risk.

This week, the Tennessean reported that the method TVA and others are using to analyze the toxicity of the coal ash covering the Harriman community may not adequately determine the potential risk.

The company as well as state agencies have been using a test known as the Toxicity Characteristic Leaching Procedure. This involves adding a solution of water and acetic acid to a ground-up ash sample and then testing the liquid for the type and amount of toxic substances that come out of the ash.

Experts have raised concerns about how effectively such a test mimics real-world conditions. They also say that there are ways to rig the test so the samples pass.

But the TCLP tests are significantly cheaper than more accurate methods of analysis -- $3,000 compared to as much as $15,000 per test. TVA is already spending about $1 million per day on the cleanup.

Meanwhile, the push to better regulate coal combustion ash as hazardous waste appears to be picking up momentum. Congressman Nick Rahall (D-W.V.) has introduced legislation to set minimum design and stability standards for coal ash storage facilities like the one that collapsed in Tennessee.

And Lisa Jackson, President Obama's pick to head the Environmental Protection Agency, said during her confirmation hearing that she would have the agency conduct a new assessment of coal ash to determine whether it should be classified as hazardous waste.

But as the American News Project has detailed, an effort in back in 2000 to classify the material as hazardous waste was scuttled by then-administrator Carol Browner under heavy pressure from the coal ash lobby, which remains opposed to federal regulation.