Skip to main content
Join the voice for a changing South.
Donate Today
By Sue SturgisJanuary 27, 2009 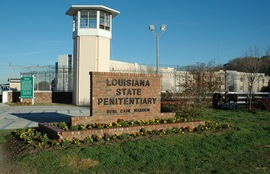 The torture of prisoners in U.S. custody is not found only in military prisons in Iraq, Afghanistan and Guantanamo. If President Obama is serious about ending U.S. support for torture, he can start here in Louisiana.

The Louisiana State Penitentiary at Angola is already notorious for a range of offenses, including keeping former Black Panthers Herman Wallace and Albert Woodfox in solitary confinement for over 36 years.

Now a death penalty trial in St. Francisville, La. has exposed widespread and systemic abuse at the prison. Even in the context of eight years of the Bush administration, the behavior documented at the Louisiana State Penitentiary at Angola stands out both for its brutality and for the significant evidence that it was condoned and encouraged from the very top of the chain of command.

In a remarkable hearing that explored torture practices at Angola, 25 inmates testified last summer to facing overwhelming violence in the aftermath of an escape attempt at the prison nearly a decade ago. These 25 inmates -- who were not involved in the escape attempt -- testified to being kicked, punched, beaten with batons and with fists, stepped on, left naked in a freezing cell, and threatened that they would be killed. They were threatened by guards that they would be sexually assaulted with batons. They were forced to urinate and defecate on themselves. They were bloodied, had teeth knocked out, were beaten until they lost control of bodily functions, and beaten until they signed statements or confessions presented to them by prison officials. One inmate had a broken jaw, and another was placed in solitary confinement for eight years.

While prison officials deny the policy of abuse, the range of prisoners who gave statements, in addition to medical records and other evidence introduced at the trial, present a powerful argument that abuse is a standard policy at the prison. Several of the prisoners received $7,000 when the state agreed to settle, without admitting liability, two civil rights lawsuits filed by 13 inmates. The inmates will have to spend that money behind bars -- more than 90% of Angola's prisoners are expected to die behind its walls.

During the attempted escape at Angola, in which one guard was killed and two were taken hostage, a team of officers -- including Angola warden Burl Cain -- rushed in and began shooting, killing one inmate, Joel Durham, and wounding another, David Mathis.

The prison has no official guidelines for what should happen during escape attempts or other crises, a policy that seems designed to encourage the violent treatment documented in this case. Richard Stalder, at that time the secretary of the Louisiana Department of Public Safety and Corrections, was also at the prison at the time. Yet despite -- or because of -- the presence of the prison warden and head of corrections for the state, guards were given free hand to engage in violent retribution. Cain later told a reporter after the shooting that Angola's policy was not to negotiate, saying, ''That's a message all the inmates know. They just forgot it. And now they know it again.''

Five prisoners including Mathis were charged with murder and currently are on trial, facing the death penalty -- partially based on testimony from other inmates that was obtained through beatings and torture. Mathis is represented by civil rights attorneys Jim Boren (who also represented one of the Jena Six youths) and Rachel Connor, with assistance from Nola Investigates, an investigative firm in New Orleans that specializes in defense for capital cases.

The St. Francisville hearing was requested by Mathis' defense counsel to demonstrate that, in the climate of violence and abuse, inmates were forced to sign statements through torture, and therefore those statements should be inadmissible. 20th Judicial District Judge George H. Ware Jr. ruled that the documented torture and abuse was not relevant. However, the behavior documented in the hearing not only raises strong doubts about the cases against the Angola Five, but it also shows that violence against inmates has become standard procedure at the prison.

The hearing shows a pattern of systemic abuse so open and regular it defies the traditional excuse of bad apples. Inmate Doyle Billiot testified to being threatened with death by the guards: "What's not to be afraid of? Got all these security guards coming around you everyday looking at you sideways, crazy and stuff. Don't know what's on their mind, especially when they threaten to kill you." Another inmate, Robert Carley, testified that a false confession was beaten out of him. "I was afraid," he said. "I felt that if I didn't go in there and tell them something, I would die."

Inmate Kenneth "Geronimo" Edwards testified that the guards "beat us half to death." He also testified that guards threatened to sexually assault him with a baton, saying, "that's a big black ... say you want it." Later, Edwards says, the guards, "put me in my cell. They took all my clothes. Took my jumpsuit. Took all the sheets, everything out the cell, and put me in the cell buck-naked ... It was cold in the cell. They opened the windows and turned the blowers on." At least a dozen other inmates also testified to receiving the same beatings, assault, threats of sexual violence, and "freezing treatment."

Some guards at the prison treated the abuse as a game. Inmate Brian Johns testified at the hearing that "one of the guards was hitting us all in the head. Said he liked the sound of the drums -- the drumming sound from hitting us in the head with the stick."

Two of Angola's most famous residents, political prisoners Herman Wallace and Albert Woodfox, have become the primary example of another form of abuse common at Angola -- the use of solitary confinement as punishment for political views. The two have now each spent more than 36 years in solitary, despite the fact that a judge recently overturned Woodfox's conviction. (Prison authorities continue to hold Woodfox and have announced plans to retry him.) Woodfox and Wallace -- who together with former prisoner King Wilkerson are known as the Angola Three -- have filed a civil suit against Angola, arguing that their confinement has violated both their 8th Amendment rights against cruel and unusual punishment and 4th Amendment right to due process.

Statements by Angola warden Burl Cain make clear that Woodfox and Wallace are being punished for their political views. At a recent deposition, attorneys for Woodfox asked Cain, "Lets just for the sake of argument assume, if you can, that he is not guilty of the murder of Brent Miller." Cain responded, "OK. I would still keep him in (solitary) ... I still know that he is still trying to practice Black Pantherism, and I still would not want him walking around my prison because he would organize the young new inmates. I would have me all kind of problems, more than I could stand, and I would have the blacks chasing after them ... He has to stay in a cell while he's at Angola."

In addition to Cain's comments, Louisiana Attorney General James "Buddy" Caldwell has said the case against the Angola Three is personal to him. Statements like this indicate that this vigilante attitude not only pervades New Orleans' criminal justice system, but that the problem comes from the very top.

The problem is not limited to Louisiana State Penitentiary at Angola -- similar stories can be found in prisons across the U.S. But from the abandonment of prisoners in Orleans Parish Prison during Katrina to the case of the Jena Six, Louisiana's criminal justice system, which has the highest incarceration rate in the world, often seems to be functioning under plantation-style justice. Most recently, journalist A.C. Thompson, in an investigation of post-Katrina killings, found evidence that the New Orleans police department supported vigilante attacks against Black residents of New Orleans after Katrina.

Torture and abuse is illegal under both U.S. law -- including the constitutional prohibition against cruel and unusual punishment -- and international treaties that the U.S. is signatory to, from the 1948 Universal Declaration of Human Rights to the International Covenant on Civil and Political Rights, ratified in 1992. Despite the laws and treaties, U.S. prison guards have rarely been held accountable to these standards.

Once we say that abuse or torture is OK against prisoners, the next step is for it to be used in the wider population. A recent petition for administrative remedies filed by Herman Wallace states, "If Guantanamo Bay has been a national embarrassment and symbol of the U.S. government's relation to charges, trials and torture, then what is being done to the Angola 3 ... is what we are to expect if we fail to act quickly ... The government tries out its torture techniques on prisoners in the U.S. -- just far enough to see how society will react. It doesn't take long before they unleash their techniques on society as a whole." If we don't stand up against this abuse now, it will only spread.

Despite the hearings, civil suits, and other documentation, the guards who performed the acts documented in the hearing on torture at Angola remain unpunished, and the system that designed it remains in place. In fact, many of the guards have been promoted, and remain in supervisory capacity over the same inmates they were documented to have beaten mercilessly. Warden Burl Cain still oversees Angola. Meanwhile, the trial of the Angola Five is moving forward, and those with the power to change the pattern of abuse at Angola remain silent.

Jordan Flaherty is a journalist based in New Orleans, and an editor of Left Turn Magazine. He was the first writer to bring the story of the Jena Six to a national audience, and his reporting on post-Katrina New Orleans has been published and broadcast in outlets including Die Zeit (in Germany), Clarin (in Argentina), Al-Jazeera, TeleSur, and Democracy Now. He can be reached at neworleans@leftturn.org.

Research assistance for this article by Emily Ratner.