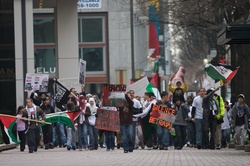 The Southern United States hasn't been left out of the mobilization. In the past week alone, rallies have been held in cities across Arkansas, Florida, Georgia, Kentucky, Louisiana, North Carolina, Tennessee, Texas and Virginia. Students at universities and colleges throughout the South have also rallied their campuses for peace in Gaza, joining an international array of activists calling for coordinated boycott, divestment and sanctions against Israel and Israeli corporations.

Since it was launched on Dec. 27, the Israeli offensive into the the densely populated Gaza Strip has killed almost 1,000 Palestinians, according to Palestinian health officials. The United Nations has estimated that about one-fourth of those killed were civilians. The U.N. has called the Israeli airstrikes on the Gaza Strip a severe and massive violation of international humanitarian and human rights law.
Around the South residents have joined together to protest the rising death toll with growing demonstrations. Here's just a few examples from across the region:
Inside Higher Ed reports that "Israeli attacks on Hamas forces in Gaza have stirred sleeping campuses, and rallies and petition drives are gaining momentum as more colleges resume full operation." Vigils at college campuses across the South drew hundreds of people, such as the one held at Duke University this weekend. This week approximately 100 students on the University of Louisville, Ky. campus came out to protest Israeli aggression. 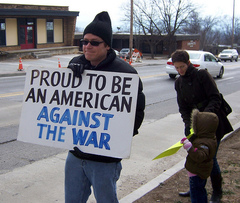 [Photos from top to bottom: More than 500 people march in Charlotte, N.C. (Photo by Henk Jonker); More than 2,000 gather in Orlando; Some 50 people braved strong winds to participate in a vigil at the intersection of 7th St. and Hawthorne Ln. in Charlotte, N.C. (Photo by Abby Whisenant).; In the last two photos: several dozen Fayetteville, Ark. residents gathered in front of the Federal Building to participate in a vigil for peace (Photo by tsweden).]

The South at war -- in Gaza