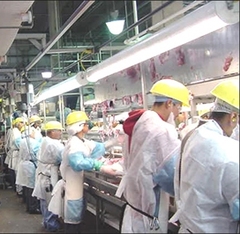 Union membership in Southern states held steady in 2008 amidst rising unemployment and a troubled economy, according to an analysis of government statistics released this week.

A review of new Bureau of Labor Statistics data by the non-profit Institute for Southern Studies finds that the percentage of workers in the South belonging to unions in 2008 stayed at 5.3 percent, the same unionization rate as in 2007.

Among the 13 Southern states included in the Institute analysis, seven showed union gains and six had a net loss in union membership. Nationally, union membership rose from 12.1 percent of employees in 2007 to 12.4 percent in 2008, the second year in a row that unions had shown gains. 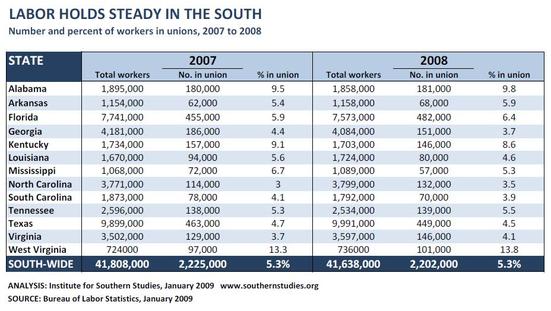 Southern unions were able to hold their ground despite big job losses in the region. The total number of union members in the South actually declined by 23,000 in 2008, but because the overall Southern workforce shrank even more, the rate of unionized workers stayed the same.

"Southern union members appear to have weathered the economic downturn slightly better than their non-union counterparts, for a number of reasons," said Chris Kromm, director of the non-profit Institute. Likely factors include the kind of industries that have lost jobs, like the largely non-unionized finance sector, and greater job protections enjoyed by union members, Kromm said.

Among other findings of the Institute for Southern Studies analysis of federal labor data:

Union membership continues to hold steady in the South

KROMM REPORT: History shows what a New New Deal could do for the South