Skip to main content
Defend democracy in the South.
Donate Today
By Desiree EvansFebruary 27, 2009
This week across the Gulf Coast and in many places throughout the South, revelry reigned supreme. Fat Tuesday swooped in, bringing festivities and shining a light on how far the region has come in the three and a half years since hurricanes Katrina and Rita changed the landscape and impacted so many lives along the Coast.

If you go to some places in the region, like the tourist-lined and bustling streets of New Orleans' French Quarter, you would think that recovery and resurgence has indeed come to the area.

But as Facing South reported earlier this week, a very different picture can be painted for other parts of the Coast, where hardship, blight and disrepair have become the way of the day. As the partying ends and tourists go home, the residents of New Orleans will wake up to a city that has, according to the latest New Orleans Index, 70,000 blighted or empty homes, one of many signs that the ongoing crisis of the failed Gulf recovery is still here.

As the New Orleans Index underscores:

...the massive destruction from Hurricane Katrina remains widespread, dwarfing the rebuilding that is underway. Hundreds of streets are still in disrepair. Tens of thousands of residential, commercial, and institutional buildings remain damaged and unoccupied.

Much work remains to secure a successful long-term recovery for greater New Orleans and other communities in the Gulf Coast. To that end, a federal partnership between the new Obama administration and Congress with the people of Louisiana remains critical.

But the spirit of recovery is not one that can be dampened in the region. As we have reported, advocates are still working hard for a Gulf Coast Civic Works Program, the massive, New Deal-era inspired public works program that could bring as many as 100,000 green living-wage jobs to the region if approved by the new administration and Congress.

The Gulf Coast in 2009 is a region struggling to come to terms with unequal development. From the barren streets of New Orleans' Lower Ninth Ward to the largely overlooked recovery of Galveston following Hurricane Ike, many barriers remain to recovery and prevent the region's poorest from being able to reclaim their lives.

Although the the Gulf Coast has faded from the headlines, three and a half years after Hurricane Katrina there can be no doubt that there are still many stories to be told.

Here are a few books and documentaries that have come out this past year that try to do just that:

"Faubourg Tremé: The Untold Story of Black New Orleans," is a moving film that reveals the hidden history of a unique New Orleans neighborhood. Overlooked by the history books, the neighborhood of Faubourg Tremé lies just outside of New Orleans' French Quarter. It is considered the oldest black neighborhood in America. But not many people know that fact. Nor do many people know that during the time of slavery the area was home to the largest concentration of free black people in the South. Nor do people know that the Southern civil rights movement originated there and that jazz was born there. The film, by Dawn Logsdon and Lolis Eric Elie and produced by Wynton Marsalis and Stanley Nelson, is a moving portrait of this untold history.

The popular images of New Orleans seen in tourist books often neglect to mention the rich and deep history of African Americans in the city, and the role they played in building New Orleans and its vibrant culture. The documentary introduces viewers to a neighborhood where, in the early 1800s, black poets, painters, composers and authors flourished more than a century before the Harlem Renaissance. It's a place where jazz was born at Congo Square, as slaves celebrated West African rituals. Where the first African-American daily newspaper originated, and where a century before Rosa Parks, neighborhood leaders organized sit-ins and protests that successfully desegregated the city's streetcars and schools.

The film then explores the neighborhood's struggle to survive the crises of the last century. But more than anything it shows the resilience and strength of a community. "After Katrina, a lot of people talked about the resilient spirit of the people of New Orleans - how they persisted and endured," explained filmmaker Dawn Logsdon. "To me, this neighborhood is the embodiment of that."

For more information on the film, visit the website. 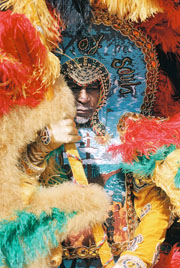 Donned in colorful feathers and beads, the Mardi Gras Indians of New Orleans have come to represent the unique cross-fertilization of cultures and traditions that have thrived in the city. As early as the 1700s, African Americans in New Orleans masqueraded as Native Americans in honor of the refuge local tribes offered runaway slaves in the bayous of New Orleans, and of bonds of friendship and marriage forged between these peoples.

"Tootie's Last Suit," a documentary by filmmaker Lisa Katzman, is at once a poignant look at the traditions of the Mardi Gras Indian subculture, as well as a portrait of one of its most revered leaders -- Allison "Tootie" Montana. Tootie "masked" or donned his suit for more than half a century and died in the New Orelans city council chambers while protesting police brutality just a few months before Hurricane Katrina.

The feature-length documentary explores the complex relationships, rituals, history, and music of the vibrant Mardi Gras Indian culture. And as the website explains: "In the wake of the hurricane and the levees' breach, when thousands of African Americans were abandoned by public officials to suffer, and to die, Chief Tootie Montana's testimony echoes as a prophetic premonition of how Katrina would lay bare before the world the extremities of racism in America. In the aftermath of Katrina, "Tootsie's Last Suit" bears witness to the Mardi Gras Indians who, in picking up the threads of their torn lives and tradition, are the spiritual healers of New Orleans."


The Old Man and the Storm 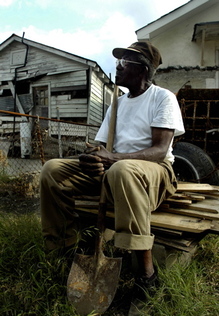 In "The Old Man and the Storm," filmmaker June Cross spent 18 months documenting the struggle of 82-year-old Herbert Gettridge to rebuild his devastated home in New Orleans' Lower Ninth Ward. Gettrdige has a family history that stretches back five generations in New Orleans and a personal history that included breaking color lines in the city's craftsmen's guilds, reports the St. Petersburg Times.

His compelling story is deftly captured in the documentary as it chronicles his defiant, lone effort to rebuild the house he lost. The film also captures the devastation of the flood and its aftermath in the Lower Ninth Ward, and the failure of the Road Home program and the federal and local governments, entities which acted more as a barrier to rebuilding than anything else.

For more information and to view the program online visit Frontline.

From the publisher: When Hurricane Katrina hit, seventy thousand people were still in New Orleans. In Storms Still Raging, nationally recognized human rights lawyer and professor of law at Loyola University New Orleans College of Law Bill Quigley passionately tells the stories and the facts about who was left behind when Katrina hit, and who is still being left behind in the rebuilding of New Orleans. Quigley writes about Katrina's effect on housing, public education, healthcare, and criminal justice in a way that makes these conflicts come alive. Katrina pulled back the curtains. Katrina ripped off the bandages. Katrina laid bare our people, our social systems, and our histories of injustice, for all to see. What Katrina revealed about New Orleans and the United States offers challenges and opportunities for us all. 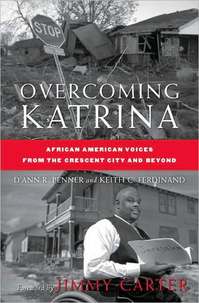 From the publisher: Overcoming Katrina tells the stories of 27 New Orleanians as they fought to survive Hurricane Katrina and its aftermath. Their oral histories offer first-hand experiences: three days on a roof with Navy veteran Leonard Smith; at the convention center with waitress Eleanor Thornton; and with Willie Pitford, an elevator man, as he rescued 150 people in New Orleans East. Overcoming approaches the question of why New Orleans matters, from perspectives of the individuals who lived, loved, worked, and celebrated life and death there prior to being scattered across the country by Hurricane Katrina. These narratives are memorials to the corner stores, the Baptist churches, the community health clinics, and those streets where the aunties stood on the corner, and whose physical traces have now all been washed away. They conclude with visions of a safer, equitably rebuilt New Orleans.

From the publisher: After Hurricane Katrina, Dan Baum moved to New Orleans to write about the city's response to the disaster for The New Yorker. He quickly realized that Katrina was not the most interesting thing about New Orleans, not by a long shot. The most interesting question, which struck him as he watched residents struggling to return, was this: Why are New Orleanians--along with people from all over the world who continue to flock there--so devoted to a place that was, even before the storm, the most corrupt, impoverished, and violent corner of America? Nine Lives is a multivoiced biography of this dazzling, surreal, and imperiled city through the lives of nine characters over forty years and bracketed by two epic storms: Hurricane Betsy, which transformed the city in the 1960's, and Katrina, which nearly destroyed it. By resurrecting this beautiful and tragic place and portraying the extraordinary lives that could have taken root only there, Nine Lives shows us what was lost in the storm and what remains to be saved.