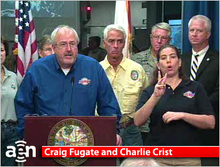 Political observers are waiting for news about who President Obama will choose to head the Federal Emergency Management Agency. Insiders say the announcement could come as early as this week.

So, who's on the shortlist?

Both candidates come with more than 20 years of experience.

Former Florida Gov. Jeb Bush named Fugate director of the Florida Division of Emergency Management in 2001. Fugate gained national recognition for leading Florida's response to the eight hurricanes that damaged the state in 2004 and 2005.

FEMA, whose name became synonymous with disaster mis-management under the Bush administration, has been under public scrutiny since its failed response to 2005's Hurricane Katrina. Both Fugate and Gordon were under consideration to head FEMA when former FEMA director Michael Brown was fired following the agency's response to Katrina. At the time, however, neither Gordon nor Fugate was interested in the position -- Fugate because he was happy with his job in Florida and Gordon because she did not think the former administration would make FEMA a priority, reports the AP.

Fugate acknowledged that he recently spoke with Homeland Security Secretary Janet Napolitano about a "high-level position" at FEMA. "I did not apply for a job. I did not post a résumé for a job. I did not ask anyone to seek a job for me. I was contacted," Fugate told the Miami Herald. "I've been very clear I have a great boss and a great time and I'm not looking for a job. But I've also said: When the president asks you to serve the United States, serve your country, your first answer is not to say no."

In 2008, Fugate was named one of Government Technology's Top 25 Doers, Dreamers and Drivers. The Miami Herald reports that Fugate envisions an aspect of emergency-response systems in which the general population can help disseminate information about a disaster in almost real time. His blog shows an interest in using social media and cutting-edge technology to track disasters and organize response.

FEMA is still rebuilding from its disastrous 2005 response to Hurricane Katrina under former director Michael D. Brown. But the future of the agency is still being debated -- will it be turned into a stand-alone agency or will it be reorganized?

Observers say that a top priority will be bringing in experienced leadership. One of the largest criticisms made of FEMA under the Bush administration was that the nation's emergency management capability was severely eroded -- critics argued that experienced, professional emergency managers at FEMA were replaced by politically connected novices with little background or knowledge of emergency management.

That was exemplified by the appointment of Michael Brown. While both Fugate and Gordon have veteran career experiences in emergency management, Michael Brown had no previous disaster management experience when he was appointed by the Bush administration to head FEMA in 2001. Indeed, Brown came to FEMA after spending a little over a decade as the commissioner of judges and stewards for the International Arabian Horse Association.