Skip to main content
Join the voice for a changing South.
Donate Today
By Guest BloggerFebruary 23, 2009
By Phil Mattera 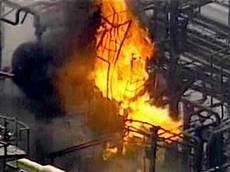 For the past eight years, the oil giant formerly known as British Petroleum has tried to convince the world that its initials stand for "Beyond Petroleum." An announcement just issued by the U.S. Environmental Protection Agency may suggest that the real meaning of BP is Brazen Polluter.

The EPA revealed that BP Products North America will pay nearly $180 million to settle charges that it has failed to comply with a 2001 consent decree under which it was supposed to implement strict controls on benzene and benzene-tainted waste generated by the company's vast oil refining complex in Texas City, Texas, located south of Houston.  Since the 1920s, benzene has been known to cause cancer.

Among BP's self-proclaimed corporate values is to be "environmentally responsible with the aspiration of 'no damage to the environment'" and to ensure that "no one is subject to unnecessary risk while working for the group." Somehow, that message did not seem to make its way to BP's operation in Texas City, which has a dismal performance record.

The benzene problem in Texas City was supposed to be addressed as part of the $650 million agreement BP reached in January 2001 with the EPA and the Justice Department covering eight refineries around the country. Yet environmental officials in Texas later found that benzene emissions at the plant remained high. BP refused to accept that finding and tried to stonewall the state, which later imposed a fine of $225,000.

In March 2005 a huge explosion (photo) at the refinery killed 15 workers and injured more than 170. The blast blew a hole in a benzene storage tank, contaminating the air so seriously that safety investigators could not enter the site for a week after the incident.

BP was later cited for egregious safety violations and paid a record fine of $21.4 million. Subsequently, a blue-ribbon panel chaired by former secretary of state James Baker III found that BP had failed to spend enough money on safety and failed to take other steps that could have prevented the disaster in Texas City. Still later, the company paid a $50 million fine as part of a plea agreement on related criminal charges.

In an apparent effort to repair its image, BP has tried to associate itself with positive environmental initiatives. The company was, for instance, one of the primary sponsors of the big Good Jobs/Green Jobs conference held in Washington earlier this month. Yet as long as BP operates dirty facilities such as the Texas City refinery, the company's sunburst logo, its purported earth-friendly values and its claim of going beyond petroleum will be nothing more than blatant greenwashing.

VOICES: Tony Hayward got his life back, now how about ours?