Skip to main content
Join the voice for a changing South.
Donate Today
By Guest BloggerFebruary 17, 2009
By Phil Mattera

Our culture worships spunky small businesses and entrepreneurship. Stewart Parnell epitomized that ideal and was living the good life in Lynchburg, Virginia until last month, when his Peanut Corporation of America (PCA) was linked to one of the biggest salmonella outbreaks--at least eight deaths and more than 500 illnesses--ever to occur in the United States. 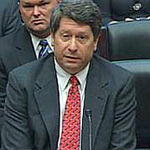 According to federal officials, PCA knowingly shipped contaminated peanuts as well as peanut butter and paste on numerous occasions, including 32 truckloads meant for the school lunch program. PCA also provided tainted raw materials for many large food processors, which have issued a cascade of product recalls. PCA is now the subject of a criminal investigation, and this week Parnell (photo) was compelled to appear at a Congressional hearing, where he grim-facedly invoked the Fifth Amendment and declined to answer questions.

He had reason to look grim. The House Energy and Commerce Committee released several e-mail messages sent by Parnell, including one in which he told his plant manager to make shipments (his exact words were "let's turn them loose") despite some test results showing evidence of salmonella. In another he complained that those problematic results were "costing us huge $$$$$."

This was also a week when the chief executives of the country's largest financial institutions were called before Congress and pelted with questions about bonuses paid out amid the massive federal bailout of the industry. But these days everyone expects executives of large corporations to be reprobates.

The Parnell situation is more chilling. He is the head of a privately held company with annual revenues of only about $25 million, which makes it a small business by contemporary standards. PCA had almost no public profile until last month, and Parnell's only previous time in the national spotlight (though a much dimmer one) was in 2005, when Bush Administration Agriculture Secretary Mike Johanns appointed him to the Peanut Standards Board. (Parnell was just ousted from the panel by the USDA, which also announced that it is seeking to debar PCA from doing business with the federal government.)

According to the Atlanta Journal-Constitution, PCA was built by Parnell's father, Hugh Parnell, as an outgrowth of his ice cream sandwich business. The company later got caught up in the takeover wave that swept through the small world of peanut processing. The Journal-Constitution reports that PCA was sold in 1995 to Morven Partners, the vehicle set up by billionaire investor John Kluge to take over various nut companies such as Jimbo's Jumbos.

Jimbo's, by the way, was mentioned in one of the e-mails released this week by the House. In it Parnell said: "We need to find out somehow what our competition (JIMBOS) is doing [about salmonella] and at the very least mimic their policy."

Stewart Parnell and his brother Hugh Brian Parnell, the Journal-Constitution goes on to report, became management consultants for Morven until the late 1990s, when Stewart repurchased PCA.

Hugh Brian Parnell told reporters that work and family occupy his brother Stewart's time. "He doesn't drink, smoke or socialize," Huge was quoted as saying. "He's a family man. You never see him without a grandchild around." The Associated Press quotes a neighbor of Stewart's as saying: "He's always been an upstanding, generous person and a pillar of the community." Parnell and PCA didn't have a much of a presence in the business community in Lynchburg, where the company has its modest headquarters. "This episode is the first time I've heard of them," the president of the city's chamber of commerce was quoted as saying. 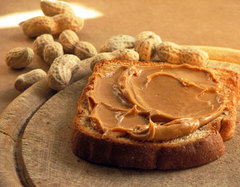 Even less is known about Parnell's associate David Royster III, who reportedly financed the acquisitions that allowed PCA to reach its current size. Royster is one of the younger members of a family that operates a variety of apparently respectable businesses in Shelby, North Carolina.

The apparent fact that supposed pillars of the community can engage in outrageously reckless business practices shows that there is sometimes a fine line between the aggressive pursuit of profit and behavior that can legitimately be called evil. Those who would venerate entrepreneurship should keep in mind that it can also have a dark side.

VOICES: Conservatives to the poor: "Move!"

VOICES: Does the debt deal make you sick?