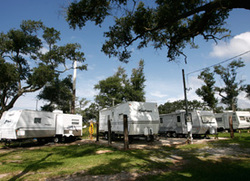 Remember that study the Centers for Disease Control and Prevention promised it would do to track the health of children who lived in formaldehyde-contaminated trailers provided to Hurricane Katrina victims? Well, the Federal Emergency Management Agency finally hit the send button on a database that the CDC needs to start the study. But the database doesn't necessarily include the current addresses of the victims, making it difficult for the CDC to track down potential participants.

"We don't generally capture a specific address for where the occupants went after they leave our program," said Johnathan Torres, a program specialist for FEMA's Housing Operations Unit. "But we always know their pre-disaster residence."

Unfortunately for the CDC, the people who lived in the trailers are a highly mobile part of the population. Many didn't move back to their former addresses, because their homes were destroyed by the hurricane.

The last time [ProPublica] reported on this, Dr. Heidi Sinclair, a pediatrician based in Baton Rouge, La., commented on the difficulty of CDC's task. "These people are going to be impossible to track down. Most of them have pay-as-you-go cell phones and have already moved," Sinclair said. "CDC should have started doing this a year before they wanted to start the study."

Exposure to formaldehyde can increase the risk of cancer and asthma attacks and can cause severe skin, ear, nose and throat irritations, especially among children and the elderly. The chemical is found in the glue that is used to make plywood and particleboard in most trailers.

In February 2008, the CDC released test results showing that people living in the trailers were exposed to levels of formaldehyde far higher than what the government considers safe. This countered the conclusions of a CDC study done a year earlier, which was misused (PDF) by FEMA to tell Congress and the public that the formaldehyde did not reach "a level of concern."

The CDC started talking about doing a long-term examination of how children were affected by the formaldehyde more than a year ago, but it still hasn't finalized a methodology for the study, according to Michael McGeehin, the CDC official leading it.

In an e-mail to ProPublica this week, McGeehin added that the agency won't reveal the details of the methodology until "a candidate is chosen to serve as a contractor on this project" and the contractor gets a chance to help shape the methodology.

A CDC PowerPoint presentation (PDF) obtained by ProPublica shows that the CDC had originally planned to get the study's methodology approved by the White House's Office of Management and Budget in May 2008. But the CDC didn't request the data it just received from FEMA until June 2008. FEMA previously cited privacy concerns to explain why it didn't provide the information sooner.

[ProPublica has] submitted a FOIA request for the database to see if we can get a sense of how many current addresses are in it. To avoid any privacy issues, we asked the CDC to redact names of individuals in the data.

This article originally appeared in ProPublica.

Three years after the BP disaster, an urgent call for feds to address health effects

Study finds that Katrina kids are the sickest children in the U.S.