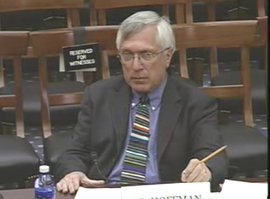 U.S. Rep. Brad Miller (D-N.C.) chaired a hearing last week on failures of the federal Agency for Toxic Substances and Disease Registry, a branch of the Centers for Disease Control and Prevention, to protect public health from environmental contaminants. The hearing revealed numerous problems at ATSDR -- including the fact that it tried to bury research on the possible hazards of burning waste coal.

Problems at ATSDR first came to the attention of the Science and Technology Investigations and Oversight subcommittee after the agency's badly flawed health assessment for formaldehyde exposure in Hurricane Katrina and Rita victims living in FEMA trailers. Through a series of hearings, Congress learned that ATSDR had honored a request from FEMA -- which was facing litigation over the trailers' formaldehyde levels -- to calculate the risk posed by formaldehyde by assuming storm victims were exposed for less than two weeks, even though many had already been living in the units for more than a year. Under pressure from Congress, ATSDR eventually corrected its findings and almost two years after first being notified about the formaldehyde problem finally acknowledged the trailers' hazards.

In the wake of its investigation into formaldehyde in FEMA trailers, the subcommittee heard about other problems with ATSDR's work. It also heard about what Miller referred to in his opening statement as the agency's "keenness to please industries and government agencies that prefer to minimize public health consequences of environmental exposures."

Last week's hearing featured testimony from a number of sources who pointed to serious failings by the ATSDR that are putting people's health in danger. They included Dr. Ronald Hoffman, a blood cancer expert and professor at the Mount Sinai School of Medicine in New York (photo above). He was part of a team of researchers who recently discovered a statistically significant cluster of a relatively rare blood cancer in Pennsylvania -- and the possibility that it could be linked to the burning of waste coal.

The finding has important implications for communities across the country. While Pennsylvania has the greatest number of waste-coal power plants, there are similar facilities in Alabama, Mississippi, South Carolina, Utah, Virginia and West Virginia, according to the Energy Justice Network. As many as 17 more waste-coal facilities are planned -- most of them in central and northern Appalachia.

Under oath, Hoffman told the Congressional subcommittee how ATSDR's management first tried to discourage his research and then to prevent the publishing of findings that suggested an environmental connection.

"My sense is that if the agency was left to itself, it would have preferred to ignore the problem," he said.

Travel through America's coalfields and you'll see huge dark-gray piles of waste coal marring the landscape like mutant mountains (photo at left). Known variously as "culm," "gob," "slate" or "boney," waste coal is mining refuse cast aside during coal processing as too low-quality to burn.

These waste coal piles cause serious environmental problems. As rain seeps through them, they leach out arsenic, iron, manganese, aluminum and other chemicals that eventually run into streams, rendering them harshly acidic and hostile to life. Sometimes the piles catch on fire, emitting noxious gases and damaging air quality.

Because these toxic waste dumps are often located on lands long abandoned by the mining companies, cleaning them up often falls to the government -- and it can be an expensive proposition. In Pennsylvania, for example, the average per-acre reclamation cost for coal refuse piles is as high as $40,000.

So when a technology came along in the 1980s that offered a cheap way of dealing with the waste, government officials across the coalfields rushed to embrace it. The technology -- known as "fluidized bed combustion" -- allows the waste coal to be burned for power.

According to the Energy Justice Network, there are now 18 FBC plants nationwide using waste coal as a primary fuel. Pennsylvania has the most with 14, followed by West Virginia with three and Utah with one. There are another 13 plants nationwide burning waste coal as a secondary fuel -- four in Virginia, three each in Alabama and South Carolina, two in Pennsylvania, and one in Mississippi. And there are plans for as many as 17 more plants that burn waste coal in states including Kentucky, Virginia and West Virginia. Some of these facilities also burn other wastes including fuel oil and tires.

But this technology presents serious environmental drawbacks. Lower temperatures and oxygen levels, low-quality fuels and limestone injection have all been found to contribute to increased emissions of polycyclic aromatic hydrocarbons (PAHs), toxic compounds known to cause genetic mutations and cancer.

In addition, ash from FBC plants has greater surface area than ash from conventional coal-fired power plants, which means the potential for greater leaching of contaminants. That's a concern, since the plants typically dispose of their ash in on-site landfills or directly into abandoned mines, both prone to leaching.

FBC plants also produce much more ash than conventional coal plants. In Pennsylvania, for example, FBC plants produce only 8 percent of the total megawatts generated by all the state's coal-fired power plants, but their ash constitutes 60 percent of all the plants' coal combustion waste, according to an Earthjustice report.

'An obvious attempt at intimidation'

Concerns about the possible environmental health effects of waste-coal-burning power plants first came to widespread public attention in 2006. That year, the Pennsylvania Department of Health released a public health assessment for a three-county area of eastern Pennsylvania that has the nation's highest concentration of these facilities. Conducted at the request of local residents concerned about unusual patterns of cancer, the assessment found that two of the counties had unusually elevated rates of polycythemia vera, a relatively rare malignancy marked by the overproduction of red blood cells.

The specific genetic mutation involved in polycythemia vera has been linked to PAH exposure.

ATSDR got involved in the investigation at the state health department's request. Dr. Vince Seaman, an ATSDR epidemiologist and toxicologist, contacted Dr. Ronald Hoffman, who agreed to evaluate blood samples from subjects thought to have the disease using a relatively new molecular test.

But to Hoffman's surprise, ATSDR's management was not only unwilling to provide funds for the tests but was resistant to having them done at all. He proceeded with funding from a private foundation.

Through his own research, Hoffman confirmed that there seemed to be an unusually high rate of polycythemia vera in the study area -- including an unusual number of cases along a single road that runs near a waste-coal-burning power plant.

The two doctors wrote an abstract about their findings for a 2007 meeting of the American Society of Hematology. Despite the fact that the abstract had been reviewed by numerous ATSDR staff, the agency objected to its submission because it had not gone through a formal clearance process. Then amidst the controversy, ATSDR sent Seaman on a months-long assignment to Mozambique -- a move that angered study participants and that Hoffman thought "showed poor judgment."

Even more surprisingly, at an October 2007 community meeting to discuss the preliminary findings, an ATSDR spokesperson presented conclusions that in Hoffman's words "seemed at odds with the results summarized in our abstract." For example, the ATSDR claimed polycythemia vera cases were scattered throughout the study area in no predictable pattern, and it downplayed the extraordinarily high rate of the disease.

"As I drove back to New York that evening with my scientific colleague Dr. Mingjiang Xu we talked about the experiences of the day," Hoffman said in his written testimony. "We commented how we felt that the ATSDR had misinterpreted and prematurely drawn conclusions about the data that we had participated in generating. ... Also we questioned if there was some outside constituency who ATSDR was responding to that made them act like they just wanted this whole matter to go away." 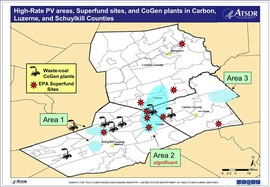 Soon after, Hoffman learned that the abstract of his research paper with Dr. Seaman had been accepted for a presentation at the hematology meeting -- which led to more problems with ATSDR management. Agency officials made repeated requests that he not exhibit his maps suggesting a geographic relationship between the polycythemia vera cases and pollution sources (see one map at right). When he refused, the agency issued a press release disavowing the findings.

When Hoffman showed up at the meeting, he got repeated cell phone calls from ATSDR officials asking him to either withdraw the abstract, make a statement before his presentation that the agency disagreed with its conclusions, or present an abridged version of the data.

"I was intimidated by these frequent calls by government officials which created a great degree of stress and anxiety for me," Hoffman said. "I was also outraged at this obvious attempt at intimidation."

However, Hoffman was not intimidated enough by ATSDR's pressure to change course. His presentation was well received at the hematology meeting -- and his fellow scientists accepted the possibility that environmental contamination was a likely factor behind the unusual rate of polycythemia vera in the study area.

Hoffman and Seaman continued to refine their research. As part of that effort, ATSDR biostatisticians performed a sophisticated analysis that confirmed a statistically significant cluster of polycythemia vera in the study area. It includes the community where multiple cases of the cancer were identified along one road.

This cluster happens to be located within a few miles of seven waste-coal-burning power plants. It's also located near several Superfund toxic waste sites. But the suspicion that the waste-coal plants are playing a special role in the cluster is heightened by the fact that an independent analysis of state cancer registry data found that two other populous Pennsylvania counties with dramatically elevated rates of polycythemia vera are also located near waste-coal-burning power plants. That analysis found no apparent link between polycythemia vera rates and Superfund sites.

But even then the pressure to scuttle the reported findings continued. PADOH's chief epidemiologist, Dr. Stephen Ostroff -- who came to the agency from the CDC while Hoffman's study was underway -- was angry that the manuscript had been altered without his approval during the peer-review process.

Hoffman reports that Ostroff made "numerous calls" to top ATSDR officials to try to get them to discredit the manuscript. So far ATSDR has not done that.

"The scientific nihilism and lack of respect for the integrity of scientific investigation initially displayed by members of the agency surely compromises the stated mission of this agency," Hoffman said in his written testimony. "Their unwillingness to look objectively at the compelling data generated by our investigations is puzzling and disturbing to me."

The information that ATSDR tried to suppress is of obvious importance to residents near the confirmed cluster. But it's also important to all U.S. residents -- and especially those living near existing or planned waste-coal-burning power plants.

Last week, U.S. Sen. Arlen Specter (R-Pa.) announced that the Senate has approved an appropriations bill with $5 million for further study of the polycythemia vera cluster. Seaman reports that his agency is interested in expanding the research beyond eastern Pennsylvania.

In the meantime, President Obama has yet to name a permanent head of the CDC to oversee ATSDR. Former CDC Director Julie Gerberding stepped down after the election, and Obama appointed as a temporary replacement Richard Besser, a CDC insider and bioterrorism expert.

No word yet on when a final appointment will be made -- or what it might mean for the integrity of ATSDR's future scientific research.

"We hope the new Obama administration will take a hard look at ATSDR," Miller said at last week's hearing. "The American people deserve better, and so do the many scientists at ATSDR who have dedicated their lives to protecting the public's health."

(Photo of Dr. Ronald Hoffman is a still from the subcommittee hearing webcast. Photo of gob pile from the Abandoned Mine Reclamation Clearinghouse. Map from ATSDR's "Polycythemia Vera Incidence in the Tamaqua Area of Pennsylvania - Community Slide Presentation," online at the agency's polycythemia vera investigation website.)

Is a Duke Energy power plant making nearby residents sick?

VOICES: Does the debt deal make you sick?