Skip to main content
Defend democracy in the South.
Donate Today
By Desiree EvansMarch 23, 2009
Some three and a half years after Hurricane Katrina, New Orleans residents will finally get a chance to put the Army Corps of Engineers on trial. 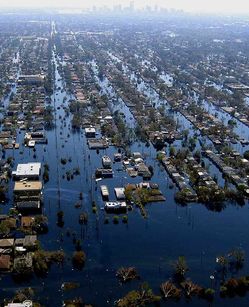 A federal judge in New Orleans ruled Friday that a lawsuit holding the Army Corps responsible for flooding during Hurricane Katrina can proceed to trial next month.

The lawsuit, which was filed by plaintiffs whose homes in eastern New Orleans, the Lower 9th Ward and St. Bernard Parish were flooded during the 2005 hurricane, argues that the Army Corps failed to properly maintain a navigation channel called the Mississippi River-Gulf Outlet (MR-GO).

The shipping canal is now known to be responsible for destroying large parts of Louisiana's coastline and protective wetlands and contributing to the devastating damage New Orleans suffered during Hurricane Katrina. MR-GO intensified the hurricane's storm surge and flooded eastern New Orleans and St. Bernard Parish.

In his Friday decision, Judge Stanwood Duval said the decision for a trial is required in order to determine whether the corps failed to take the risk of flooding from the outlet seriously after it dug the channel.

As the Times Picayune reports:

Duval said a trial is necessary to hash out several "material questions of fact," including whether the National Environmental Protection Act was violated by what the Corps claims were the legally-permissible, discretionary decisions it made in designing, building and maintaining the 76-mile channel, and whether, as the plaintiffs maintain, the Corps violated that law's requirement to warn Congress of the dangers presented by the MRGO.

This is the first case against the Army Corps by Katrina flood victims to go to trail. The outcome of this case could set the stage for thousands of other people whose homes and businesses were flooded in the same area to seek compensation from the federal government for the Army Corp's negligence. Another group of New Orleans residents has a separate lawsuit pending that asks the court to allow the case against the Army Corps to proceed as a class action, representing everyone in those areas who sustained flooding in the 2005 storm.

Prior attempts to sue the corps have failed. In January 2008, Duval dismissed a class-action lawsuit against the Army Corps over the breaching of New Orleans' 17th Street Canal during Katrina. The judge ruled that the corps was immune in that case under the Flood Control Act of 1928, which grants immunity to the federal government when flood control projects -- including floodwalls -- break. Class action lawsuits filed against insurance companies for flood damage were also dismissed in 2007 by the 5th U.S. Circuit Court of Appeals.

The End of Mister Go

The federally-funded MR-GO was dug into the swamps southeast of New Orleans in the 1960s as a shortcut between New Orleans and the Gulf of Mexico. But the catastrophic impact of the project is no longer up for debate. Yet, for years the Environmental Protection Agency and other federal agencies allowed energy companies to decimate Louisiana's coastal wetlands, the best buffers against hurricanes, with projects like MR-GO. For just as many years, residents, coastal advocates, environmentalists, civil rights groups, and policy makers argued for MR-GO's closure, as the 76-mile shipping channel continued to grow in size due to erosion, bringing with it daily tidal flows of salt water that killed wetlands, marsh and swamp forests.

It wasn't until after the devastation of Katrina that that the outcry against the channel gained momentum, prompting Congress to allow the Corps to close the shipping route. And now, some fifty years after digging MR-GO and destroying vast wetland areas, the Corps has finally begun to look at restoring the damage the channel caused.

But the restoration is too little too late for families who lost everything to the flooding. Jonathan Andry, a lawyer for the plaintiffs, told the Associated Press that the corps never apologized after homes, businesses and whole neighborhoods of eastern New Orleans and nearby St. Bernard parish were swamped by floodwaters surging up the channel. "When the Mister Go caused the flooding, the corps didn't even come out and say to the people ... 'we're sorry,'" Andry said. "Not only that, they came into court and they say, 'it's just a terrible thing that happened to you, but we're immune. And oh, by the way, go enjoy your destroyed life.'"

The plaintiffs' lead trial lawyer, Pierce O'Donnell, told the Times-Picayune that his clients will be looking toward Washington, D.C. for support. "Before and after his election, President Obama promised that he would make rebuilding New Orleans a top priority," O'Donnell said. "We are looking to the White House for leadership in expeditiously resolving the claims of Katrina victims in a fair and equitable manner. The continued stonewalling of Katrina victims is a national disgrace."

The trial is scheduled to start on April 20.

Trial to open in lawsuit connected to hospital deaths after Katrina