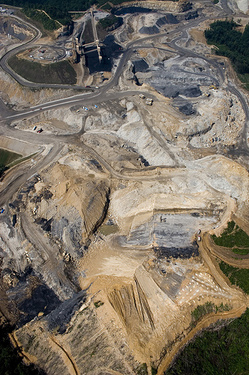 Big news today from the Charleston (W.V.) Gazette: The Obama administration has launched a crackdown on mountaintop removal by moving to delay or block mining permits damaging Appalachian communities and ecosystems.

EPA officials quietly began the action Monday, with letters aimed at blocking or slowing down two mining permits the federal Army Corps of Engineers proposed to issue in West Virginia and Kentucky. Agency officials then made a formal announcement this afternoon.

EPA Administrator Lisa Jackson says her agency plans to review other mining permit requests as well. Yesterday Obama administration attorneys said the development of a new policy on mountaintop removal was in the work.

You can read the two letters sent by the EPA to the Army Corps of Engineers office in Huntington, W.V. here. Ward also posted the EPA's press release at his excellent Coal Tattoo blog, where he recently covered Facing South's report on a federal agency's effort to scuttle research pointing to possible hazards of waste-coal-burning power plants.

Groups on both sides of the MTR issue are already responding, with the Sierra Club issuing a statement praising the EPA's move and the National Mining Association charging that it puts jobs and coal production at risk.