Skip to main content
Join the voice for a changing South.
Donate Today
By Sue SturgisMarch 9, 2009 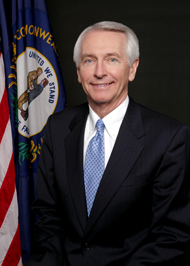 An alliance of progressive, green and labor groups is promoting a proposal to put the country back to work with a Clean Energy Corps -- and Kentucky is leading the way with an ambitious model for how the initiative could work.

Not exactly what one might expect from a major coal state.

Gov. Steve Beshear and First Lady Jane Beshear recently launched the pilot program of the Kentucky Clean Energy Corps at the North Lexington home of Leona Pena. Her residence is the first of 100 owned by low- to moderate-income Central Kentucky families that will benefit from an energy efficiency rehab provided by the initiative.

"Through this pilot project, we hope to help many Kentucky families identify energy savings and reduce carbon emissions," said Gov. Beshear, a Democrat.

The program will provide participating families with an energy audit and options for energy-saving rehab projects such as insulation of ducts and walls, replacement of energy-wasting appliances and replacement of leaky windows and doors. In addition, all Kentucky Utilities customers participating in the program will have their existing electric meters replaced with a Smart Energy meter that displayed electricity usage on an in-home monitor, helping them better track energy usage. The program aims to make participants' homes 20 to 30 percent more energy efficient.

At the same time, the Corps is working with the Kentucky Community College and Technical System and state Chamber of Commerce to establish the commonwealth as a national center for green job training and development. State economists predict the program could eventually create thousands of "green collar" jobs.

Kentucky has already bucked expectations and established itself as a national leader in promoting greater energy efficiency through its comprehensive energy independence plan, called Intelligent Energy Choices for Kentucky's Future. As part of that effort, the state recently launched an initiative requiring new public facilities or renovations to existing facilities paid for with 50 percent of more state funds to be designed according to nationally recognized Leadership in Energy and Environmental Design (LEED) standards.

Another initiative under Kentucky's plan will require certain existing state-owned facilities to reduce their use of lighting, heating, ventilation and air conditioning on nights and weekends -- an effort that will save an estimated $2 million a year in energy costs.

Kentucky's energy plan is not without its critics, though. Kentuckians for the Commonwealth, a statewide social justice advocacy group, has acknowledged that Beshear's plan has some good ideas but also points out that it includes proposals that would lead to big increases in coal extraction and more destructive mountaintop removal mining.

Nevertheless, Kentucky's efforts on the energy front are gaining national attention. In fact, they were cited as a model by the more than 80 labor, environmental, civic and policy organizations that recently unveiled a plan for a national Clean Energy Corps.

"At a time of severe hardship in the construction sector, retrofitting residential buildings to cut energy use can save consumers money, expand economic growth, reduce pollution and create jobs," said Bracken Hendricks, senior fellow at the Center for American Progress. "The Clean Energy Corps provides a national model to capture this opportunity on a large scale. And Kentucky is at the forefront, proving that this model works."

(Photo of Kentucky Gov. Steve Beshear from the state website)

Will hog farmers save renewable energy in North Carolina?

Southeast leads in creating clean-energy manufacturing jobs, but will politicians kill the momentum?