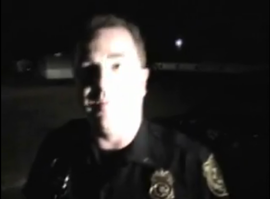 Last week Tennessee Valley Authority police arrested Matt Landon, an activist with United Mountain Defense, after he gave a ride home to Eva Hewitt, a woman who lives in the community affected by the December 2008 coal ash spill from the federal company's Kingston power plant in eastern Tennessee.

Landon and Hewitt were returning from a press conference and hearing about the harmful health effects of the disaster. Hewitt is partially blind and unable to drive, and walking along the road kicks up the ever-present coal ash dust that aggravates the deep cough, headaches and skin rashes she developed in the wake of the spill.

While driving Hewitt to her house on Swan Pond Road in Harriman, Tenn., Landon passed a TVA roadblock along the public thoroughfare. Not seeing an officer at the post, he slowed down and continued on -- as he had done many times before. But when he arrived at Hewitt's home, TVA officers arrested him for trespassing because he did not have a special TVA pass. The police confiscated his pass last month.

Landon's arrest "is part of the pattern of nonstop harassment of UMD volunteers," says Chris Irwin, an attorney with the group.

Because the UMD activists have been experiencing problems with TVA police, Landon videotapes all of his interactions with the company police and caught the arrest on tape, which you can watch here. You can also read his full account of the incident by clicking here.