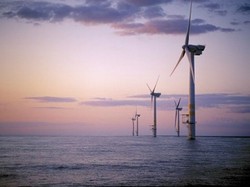 The North Carolina legislature recently created a task force to study the economic and environmental impacts of permitting drilling for oil and natural gas off the state's coast, and the group is holding its only planned public hearing tonight in the coastal community of Morehead City, N.C.

Environmental advocates expect a big turnout from the oil industry and its boosters in the "drill, baby, drill" crowd, so they're encouraging drilling opponents to attend the hearing and speak for two to five minutes on why they don't support opening up the state's coast to oil and gas operations.

But at the same time North Carolina is considering opening up its coast to polluting energy operations, it's moving slowly on tapping into a clean, renewable source of energy abundantly available off that same coast: wind power.

Last week, the Obama administration issued a long-awaited set of rules that aims to dramatically boost the development of wind farms along the nation's coastlines. The rules were held up for three years because the Bush administration did not make clean energy a priority and because of a jurisdictional dispute between the Federal Energy Regulatory Commission and the Interior Department, which will now have exclusive jurisdiction over offshore wind power, Reuters reports.

The Department of Energy estimates that the United States could be getting 20% of its electricity from wind over the next 30 years. The current estimates for North Carolina are more modest, at about 8% of the state's energy consumption. However, wind power brings with it other important benefits, such as providing more jobs per dollar invested than any other energy technology and doing so cleanly without releasing carbon dioxide or other dangerous pollutants, according to a study by the state's Wind Power Working Group.

As with any technology, offshore wind farms are not without potential drawbacks: As research scientist Dennis Scanlin with the Energy Center at Appalachian State University in Boone, N.C. recently told the Raleigh (N.C.) News & Observer, problems associated with offshore wind turbines include hurricanes, bird strikes and the potential impact on military training in the Atlantic. In addition, some people object to offshore wind farms on aesthetic grounds. However, those concerns have to be balanced against the serious environmental problems associated with fossil fuel-based and nuclear power.

Several Atlantic coast states have begun competitive bidding processes to develop wind power off their shorelines. They include New Jersey and Rhode Island -- but not North Carolina.

The state legislature is currently considering bills to set standards for commercial wind farms inside the 3-mile offshore boundary area that's under state control, and some coastal counties have adopted their own standards. But it remains unclear whether leasing for wind projects in the federally controlled waters further offshore -- where the greatest potential for wind power lies -- will begin before 2015, according to the Interior Department.

North Carolina's public hearing on offshore drilling will take place Monday, April 27 from 4 to 6 p.m. at Carteret Community College's McGee Building at 3505 Arendell St. in Morehead City. People interested in offering a comment should arrive by 4 p.m. and no later than 5 p.m. For directions, click here.

Offshore wind beats drilling for jobs and energy in the Southeast