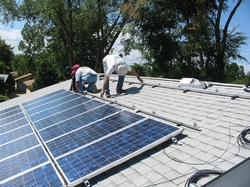 When the municipal utility in Gainesville, Fla. began holding public meetings to discuss how to provide for its future energy needs, one man in the audience kept getting up to talk about the solar boom in Germany -- a country that gets about as much sunshine as Juneau, Alaska. Eventually Ed Regan, the man in charge of strategic planning for Gainesville Regional Utilities, decided he had to travel to Germany to see for himself what was going on.

"It was a mind-boggling experience," Regan recounted during a panel discussion held last week by Washington Monthly, which recently reported on what's happening in Gainesville in a story titled "The Rooftop Revolution."

Noting how the economic downturn knocked the wind out of the U.S. renewable energy industry, author Mariah Blake described how the policy innovation Regan brought back home kept the capital flowing for green energy projects in the central Florida university town, where private entrepreneurs are scrambling to install solar arrays on the rooftops of local businesses and apartment buildings:

Why is the renewable energy market in Gainesville booming while it's collapsing elsewhere in the country? The answer boils down to policy. In early February, the city became the first in the nation to adopt a "feed-in tariff" -- a clunky and un-descriptive name for a bold incentive to foster renewable energy. Under this system, the local power company is required to buy renewable energy from independent producers, no matter how small, at rates slightly higher than the average cost of production. This means anyone with a cluster of solar cells on their roof can sell the power they produce at a profit. The costs of the program are passed on to ratepayers, who see a small rise in their electric bills (in Gainesville the annual increase is capped at 1 percent). While rate hikes are seldom popular, the community has rallied behind this policy, because unlike big power plant construction -- the costs of which are also passed on to the public -- everyone has the opportunity to profit, either by investing themselves or by tapping into the groundswell of economic activity the incentive creates.

Speaking during the panel discussion, Regan -- who has worked for Gainesville's municipal utility for almost 30 years -- said the feed-in tariff was the simplest rate design he's ever done. The utility held its first public workshop to discuss the idea in 2008, and the feed-in tariff program was up and running less than a year later. And it's been overwhelmed with applications for new projects.

"It's just been a landslide," Regan said.

Another upside has been local job opportunities, with the program winning praise from groups including the International Brotherhood of Electrical Workers, whose Gainesville-area members have no trouble finding employment nowadays. The approach also provides secure investment opportunities by offering a guaranteed rate of return over long-term contracts; in Germany, for example, renewable energy projects sparked by the feed-in tariff have become popular investments for pension funds.

Yet another benefit is reduced waste, since the feed-in tariff encourages energy to be produced where it's used so it's not lost in transmission. The most popular methods for encouraging renewable energy production in the United States now tend to be tax breaks and quotas that favor large projects such as wind farms, which provide limited financial benefits for local communities and typically require the energy to be transmitted over large distances.

Feed-in tariffs are currently in place in about 40 countries worldwide, according to a recent study by the U.S. Department of Energy's National Renewable Energy Laboratory (NREL), and they have been discussed in 15 U.S. states including Florida and Virginia. In addition, several utilities in Wisconsin currently offer limited feed-in tariffs for certain technologies, Renewable Energy World reports.

U.S. Rep. Jay Inslee (D-Wash.) has introduced legislation promoting feed-in tariffs nationally, but it still faces an uphill battle. A spokesperson for the Senate Energy and Natural Resources Committee recently told Greenwire that members believe a better way to create a market for renewable energy is through renewable portfolio standards, which require utilities to generate a portion of their power from green sources.

However, the NREL report says that the European experience demonstrates that properly designed feed-in tariffs may be more cost-effective than renewable portfolio standards.

At any rate, Inslee isn't giving up on a national feed-in tariff for the United States.

"It's an idea whose time, I believe, will come," he told Greenwire.