Skip to main content
Join the voice for a changing South.
Donate Today
By Guest BloggerApril 1, 2009
By the Staff of Frontera NorteSur, as published in New America Media 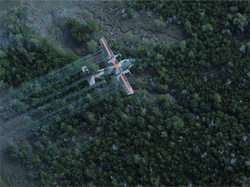 In the Vietnam War, the United States sprayed vast tracts of land with the chemical defoliant Agent Orange as part of a counter-insurgency strategy aimed at removing forest cover for Viet Cong and North Vietnamese forces.

Although the toxic dioxin released by Agent Orange was later blamed by U.S. veterans' groups and Vietnamese officials for illnesses and diseases that struck thousands of former U.S. soldiers and upwards of four million Vietnamese citizens, the U.S. Supreme Court recently refused to consider a case by pursued by Vietnamese plaintiffs against the manufacturers of Agent Orange.

Four decades later, on the U.S.-Mexico border, the U.S. Border Patrol intends to employ a chemical herbicide in order to eradicate stands of the Carrizo cane, an invasive plant that grows as tall as 30 feet and provides convenient cover for undocumented border crossers and smugglers. The variety of Carrizo cane that is common in the Laredo-Del Rio borderlands is from the region of Valencia, Spain.

Possibly beginning this week, the U.S. Border Patrol could commence aerial herbicide spraying along a slice of the Rio Grande between the twin cities of Laredo, Texas, and Nuevo Laredo, Tamaulipas. The experimental spraying would cover an area that stretches 1.1 miles between the Laredo Railroad Bridge and Laredo Community College directly across from Mexico, said Roque Sarinana, public affairs officer for the Border Patrol's Laredo sector.

In addition to aerial spraying of the herbicide imazapyr, the Border Patrol will employ hand-cutting and mechanical methods that involve applying the killer chemical at ground-level, Sarinana told Frontera NorteSur in an a phone interview. Getting rid of Carrizo cane should improve the Border Patrol's "line of sight up and down the river, " Sarinana said.

Concerned about risks to public health from possible herbicide spray drift, runoff and leaching, officials from the city government of neighboring Nuevo Laredo are steadfastly opposed to aerial spraying. "I've always been respectful of the law and sovereignty," said Nuevo Laredo Mayor Ramon Garza Barrios. "But herbicides that affect health in both countries can't be sprayed."

Mayor Garza's stance is supported by other elected and appointed officials in Mexico. On Thursday, March 19, the Tamaulipas State Legislature issued a statement requesting information about the proposed spraying from the Mexican and U.S. sections of the International Boundary and Water Commission as well as Mexican federal agencies.

The zone targeted for spraying is across the Rio Grande from Nuevo Laredo's Hidalgo neighborhood and only hundreds of yards from the Mexican city's public water intake system.

Carlos Montiel Saeb, general manager for Nuevo Laredo's water utility, said the Border Patrol advised his office to turn off water pumps a few hours prior to spraying. "If there is no problem, why are they asking us to do this?" Montiel questioned.

Border Patrol spokesman Sarinana said he had not seen a written objection from Mayor Garza, but stressed it did not mean other US officials had not received a letter. "This is all in the works, so we'll see what happens," Sarinana said, adding the Border Patrol plans on releasing a more detailed statement about the future of the Carrizo cane project.

Opposition to the Border Patrol's aerial spraying plans is likewise growing in Laredo, Texas. The two sides turned out to a March 16 meeting of the Laredo City Council in which elected officials narrowly approved by a controversial 5-4 vote an easement for the US government on city property targeted for spraying.

Jay J. Johnson Castro, Sr., executive director of the Rio Grande International Studies Center at Laredo Community College told Frontera Norte-Sur the planned aerial spraying caught residents off guard. The aerial applications could threaten more than 1,000 bird and other species at a time when spring hatchings begin and migratory birds are still in the area, Johnson said by phone from his office. The Border Patrol's Carrizo Cane Eradication Project abuts a nature trail running near the community college, Johnson lamented.

"Nobody knows the impact of imazapyr," Johnson contended. "It's no different than Agent Orange." Citing the program's environmental assessment, Johnson said aerial spraying could eventually extend along a strip of river bank 16 miles upriver from the pilot project zone. Despite the potential magnitude of the project, the Border Patrol did not gather local input as required by the National Environmental Policy Act, Johnson charged.

Like virtually all chemical pest control agents, lack of complete public information and multiple, contradictory reports surround the history of imazapyr, a substance first registered in 1984 and currently manufactured under the trade name Habitat by the multinational BASF corporation.

In 2007, BASF spokesman Joel Vollmer told the press his company's imazapyr product was widely used in wildlife refuges across the US and along the Pecos River and its tributaries to control salt cedar, another troublesome, invasive plant species afflicting the U.S. Southwest.

Public controversies over imazapyr applications have previously erupted in Alaska, California and Colombia, where experimental use of the herbicide to control illegal coca plantings was approved in 2000. A report on the chemical's history developed for the non-governmental group Alaska Community Action on Toxics said evidence existed that identified imazapyr as a contaminant of soil, groundwater and surface water. Imazapyr also contains an acid that can irritate the eyes, skin and respiratory system, the report stated. According to the report's authors, additional evidence linked the herbicide to Parkinson's Disease-like symptoms.

With the clock ticking, Johnson and a growing network of activists on both sides of the border are lobbying high officials to prevent aerial spraying before it occurs.

In an e-mail, longtime border environmental advocate and Sierra Club activist Bill Addington contended spraying would violate the 1983 La Paz accord between the United States and Mexico that requires mutual notification in the event of projects impacting the environment within a 60 mile radius on either side of the border.

"We considering all democratic options-court actions, political protests, media attention," Johnson added. "We expect our message to be heard by the environmentally-friendly Obama administration. This is too unprecedented to aerially spray a toxic chemical in a densely-populated area."

Mario Garcia, a Mexican national who frequents the Rio Grande on the Nuevo Laredo side with his sons, also expressed concern to a Mexican reporter. "I frequently come to fish in the area," Garcia said. "With what degree of confidence are we going to eat a fish if we know it is contaminated?"