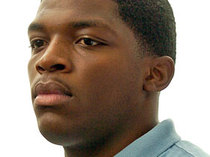 My name is Mychal Bell and I was one of the Jena Six that was charged with attempted murder down in Jena, Louisiana in 2006. As of now, seeing that we have a black president, and with the anniversary of the assassination of Martin Luther King, Jr. tomorrow, I wanted to share with you my dream like Dr. King shared his dream with everybody. I even had the chance, although I was in shackles and handcuffs, to meet Martin Luther King III, when he came to visit me in prison. So, I feel like I have a connection to the King family.

When I look back at the day that I got in a fight with Justin Barker at my high school, I now realize that I should have done what Dr. King preached, which was non-violence. A few months before the fight, I remember seeing nooses hung from a tree at my school, and none of the few black students knew who was responsible. But, what came to my mind was images of Mississippi burning, seeing how black people were hung and killed, and it felt very disrespectful. In the small town that I grew up in, I had always felt that black people and white people didn't get along. After all, this was Louisiana.

When I first entered prison, I was young, only 16, and I had been charged as an adult with attempted murder for the fight. The kids who put up the noose...nothing happened to them. Being in prison, I could only see my parents once a week and it was really hard to get by. But, being in prison, it helped me become a better man in life and become stronger and realize my dreams. I spent over a year in prison, before I took a plea bargain in juvenile court for a simple battery charge and was given time served and sent home. Since that time, my life hasn't been easy...a lot of people talk bad about me and the media has portrayed me as someone who I am not...I know the truth about who I am and I know I am not a bad person. The media pushed me to a point where I tried to kill myself, which I didn't want to do, but that incident has made me a stronger person, and now I can finally see my dream in front of me. On May 13th I will graduate from high school and in the fall I will attend a four-year university on a football scholarship. As me being a young black man I know that Dr. King died for me, so I can be in the position that I am, to become anything I want in life.

Reprinted with permission from JLMPR, INC.