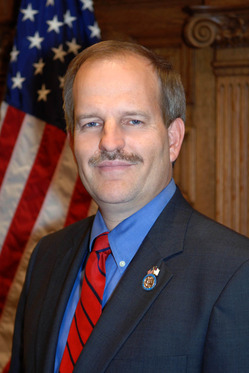 History lesson time. Do you remember a gent called "Old Gimlet Eye?" He's worth some study. His real name was Maj. Gen. Smedley Butler, a Marine and a two-time recipient of the Congressional Medal of Honor. Quite a guy, you might say, great creds.

When Butler was a popular hero almost 80 years ago, America was in about as bad shape financially as it is today. The scenarios are remarkably similar. Republicans had let the bankers and corporations run amok. Investments without substance to back them exploded, and then imploded. Thievery of the white collar variety was fashionable. The late 1920s and this decade have another striking similarity: historic disparities in wealth between the very rich and everybody else. The common folk suffered while the mega wealthy were aghast at the thought that they might be asked to pay back some of what they'd looted.

In both time periods, a newly elected Democrat was freighted with cleaning up the awful mess caused by financiers, corporations and Republicans.

In such times, radical politics gain momentum. In the 1930s, we saw strong movements on both the right and left. And like today, demagogues toss about labels, slapping often contradictory epithets on their foes, hoping the very dumbest of society will twitch in approval. Here in Georgia during the 1930s, for example, FDR's detractors claimed machine-gun nests would be built on the top of low-income housing to make ready for a Bolshevik uprising.

FDR then, as is Barack Obama today, was called both a fascist and a socialist by his detractors on the right. He was, of course, neither. Indeed, he was capitalism's savior. And, Gen. Butler may have saved FDR. Read on to find out how.

Today, with their screeching magnified by technology, we hear Bill O'Reilly, Sean Hannity, Neal Boortz, Karl Rove and even that most horrible perpetrator of crimes against constitutional government and American values, Dick Cheney, mouthing off in vicious attempts to bring down Obama.

The danger is that words can do more damage than coarsen civic dialogue. Often they provoke violence. Nothing new there. From Tennessee church killings to Pennsylvania cop killings to many other places in recent months, we've witnessed right-wing crazies attack and sometimes kill people they believe to be liberals or Democrats. And many of the nuts were clearly influenced by the radio and Fox News blowhards.

There has been a new twist in recent weeks: the talk of secession. On Boortz's show this week, for example, a caller at first raved that Jane Fonda should be executed for treason and then somehow found a way to use what happened almost four decades ago to justify "going our separate ways," meaning that his flavor of Americans should grab all they can steal and secede. Boortz used the call to justify one of his repetitive rants that democracy is the real villain, and then concluded: "We should all have our personal escape plans."

That pales, however, when compared with what recently transpired at the Georgia Senate. A group of Republican Senate misleaders in the closing hours of the legislative session declared war on the United States of America. They slipped a resolution onto the calendar and it was passed without most of the senators reading it. Ignorance is no excuse for the sponsors, however, including Senate Majority Leader Chip Rogers, who was absent from his usual duties of inciting the state's neo-Klansmen with his hate-immigrant legislation.

Key to the senate resolution was this passage: "Every State has a natural right in cases not within the compact, (casus non foederis), to nullify of their own authority all assumptions of power by others within their limits." The senators threw in the bit of Latin to indicate they are not the rubes and fools that much evidence shows they are. Among the reasons justifying a "nullification" of the nation and its laws would be the passage of gun control laws. This "nullification" claptrap stems from the pre-Civil War days, and it is no more valid then than now.

The Atlanta Journal-Constitution gave space this week to Sen. Chip Pearson (pictured above), one of the resolution's sponsors, defending the measure by wrapping himself in the words of Thomas Jefferson and James Madison. He deceitfully spins the measure -- which unequivocally calls for the destruction of this nation if leaders violate his and the other extremists' interpretation -- as merely an alert to Washington abuses.

Allowing Pearson to talk this treason is more or less equivalent to giving a Holocaust denier equal time with those who oppose genocide.

Moreover, this is pure John Birch Society style conspiracy loopiness. And the far, far, far, far right wingers have introduced similar resolutions in 30 states. All of this is bolstered by the secessionist talk on the radio (Glenn Beck: "It is our responsibility to get away from a government who doesn't listen to us any more") and even governors (Texas Gov. Rick Perry: "If Washington continues to disregard the states and continues to try to force states to change the way that they govern, who knows what may happen?")

The normally very sensible Bob Barr couldn't resist. Referring to Perry's musings, Barr opined: "If Texas were to secede, the state might enjoy a significant inward migration of independent-minded citizens from other states, and precipitate a real boom in its economy."

Throwing gasoline on the fire was the Fox News agitprop called "Tea Parties" on April 15, attended by generally not-huge, almost entirely white crowds fervent in their determined ignorance about the economy and taxes -- and, as more than a few observed, motivated more by hatred, some of it racist and all of it extremist, against Barack Obama. It shouldn't surprise us. After all, Hannity, one of the leaders of the Fox-orchestrated tomfoolery, won't give up on trying to construct a non-existent substantive relationship between Obama and 1960s radical Bill Ayers -- yet it is Hannity who has lied about his own friendship with and tutelage by white supremacist and aspirant judge killer Hal Turner.

Add to that another factor. The Department of Homeland Security recently issued an analysis of the threat of right-wing terrorism, and pointed to the very observable fact that many of the Obama-haters are tinged with racism. The report also alluded to the clearly evident fact that many returning veterans are angry that they have been screwed by the government (when that government was run by war profiteers and torture cultists of the Bush regime), and are therefore susceptible to overtures from extremist groups.

There's nothing either false or demeaning in the report. It is speculative, and it is the sort of threat assessment law enforcement agencies routinely do. Yet, the right wing howled, and never noted among their wailings that the Bush administration commissioned the study -- and commissioned a similar one on left-wing threats.

What really has the right mad is how badly they've been marginalized. George Bush didn't win a mandate or even a popular majority in 2000, and he likely wouldn't have won except for a highly politicized majority on U.S. Supreme Court. He won re-election in 2004 only because the preposterous lies that led to the Iraq war hadn't been fully exposed and the colossal incompetence of his administration hadn't been revealed.

Barack Obama, on the other hand, did win a mandate to overhaul the economy and reset the American game plan. Americans want a new social compact, one that provides security and a level playing field for all, and not just a few privileged people. It likely will take a modified form of Europe's social democratic movement, and the fact that Americans have spoken clearly on this matter is what galls the 30 or so percent in the rapidly dwindling right-wing minority.

And that brings us back to Gen. Butler. In 1934, Butler reported to Congress that he had been approached by wealthy right-wing fascists to lead a coup against FDR. With interesting resonance to today, it was called the "Business Plot." According to a 2007 BBC report, the conspirators included George Bush's grandfather Prescott, who in 1942 was involved in a bank whose assets were seized for trading with Nazi Germany. (Which begs the question: Who would have more influence on a president, a casual political acquaintance such as Ayers or a grandfather?)

A Congressional committee reported that it was able to confirm the most serious allegations of the general, other than the participation of an alleged ringleader. However, there is considerable division among historians on exactly what was planned to go down. Few dispute there was, at the very least, a lot of buzz in boardrooms about toppling FDR.

Whatever, there is a very important parallel with the recent Homeland Security report. In 1932, thousands of veterans, the "Bonus Army," had set up tent cities in Washington to protest being shafted by the government. It was these disgruntled vets that Butler said the fascist conspirators sought to enlist to be the storm troopers of a coup.

Just as the conspirators in 1934 were wholly un-American and traitorous, so, too, are those advocating secession today. Their motive isn't "liberty," but rather a society where only the wealthy count; for many of them, it would also be a society where people of color would again be second class.

As a sizable majority of Americans now perceive, the misguided class warfare policies of those now shouting secession have brought the nation to its knees. They are not patriots - illustrating that, few of the Fox and radio dissemblers have ever worn a uniform. It was fun to watch Hannity squirm the other day when confronted with his military avoidance. And my favorite is Boortz, who for years blatantly lied about his draft dodging.

I've looked around at a model locale for these traitors and secessionists to adopt as their new nation. Some of them say they want South Carolina and/or Texas to secede, and there is some attractiveness to that idea, although I suspect we'd have to beef up immigration patrols to keep these future illegal aliens from trying to sneak back into the real America.

But the best place, the place that exemplifies the very ideal of secession for these people is ... can you guess? ... yes, the former Yugoslavia. There they could hate all they want, in the midst of people who have built a culture on secession and lethal animosity towards their neighbors.

America: Love it or leave it, I say.