Skip to main content
Defend democracy in the South.
Donate Today
By Desiree EvansMay 7, 2009
Though the start of the hurricane season is just three weeks away, Gulf Coast advocates are looking at something brighter on the horizon.
Almost four years after Hurricanes Katrina and Rita devastated the Gulf Coast, legislation was introduced this week to create more jobs and support sustainable rebuilding efforts in the region.
The Gulf Coast Civic Works Act of 2009 (H.R. 2269) was introduced in the House Tuesday by Rep. Zoe Lofgren (D-CA) and a growing bipartisan group of co-sponsors. 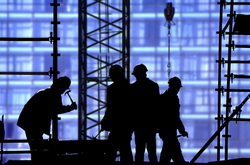 Facing South has reported that one of the major barriers to rebuilding and one of the biggest problems facing residents of the Gulf Coast post-Katrina is finding good jobs. Inspired by New Deal-era public works programs, the act would create 100,000 "green" living-wage jobs and training opportunities for Gulf Coast residents and displaced people to rebuild critical infrastructure, restore natural flood protection and increase energy efficiency in Alabama, Louisiana, Mississippi and Texas.
This is not the first time the nation has turned to civic works programs to stimulate the economy. During the Great Depression, the Works Progress Administration created 4 million public works jobs -- in just two months. In its seven-year history, the WPA employed a total of 8 million people and its accomplishments were many: The "WPA army" built or fixed up 2,500 hospitals, 6,000 schools, and 13,000 playgrounds; it also planted 3 billion trees.
Today, Gulf Coast activists hope that a similar civic works project would give the region's residents good-paying jobs to revive their hurricane-stricken communities. The legislation would allow the federal government to partner directly with local leaders and nonprofits to address remaining recovery challenges in the region, where basic infrastructure is still lacking in dozens of communities.
The idea of a federally-backed jobs program in the Gulf Coast has been floated since Katrina struck in 2005 and aggressively championed by Gulf advocates. Through the Gulf Coast Civic Works Campaign, a diverse national partnership of community, faith-based, environmental, student and human rights organizations, advocates have worked to promote the idea at the national level. 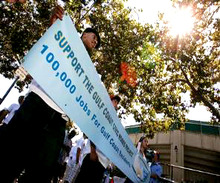 A similar measure, H.R 4048, was first introduced in the House in 2007 by Rep. Lofgren but stalled in the last Congress. Gulf Coast advocates turned to the new administration for help, hoping that funding for the project would be introduced into the economic stimulus act. In January, more than 130 organizations signed onto a letter to President Barack Obama asking him to issue an executive order creating the program in his first 100 hours of office. Although these federal actions did not come to pass, advocates continued to keep the Gulf Coast recovery program on the national radar.
"Nonprofit and community groups have been the heroic leaders of the citizen-led Gulf Coast recovery," said Jainey Bavishi, director of the Equity and Inclusion Campaign, a coalition of organizations working on recovery across Alabama, Louisiana, Mississippi and Texas.
With Katrina receding from the public's mind, there's a fear that the window of opportunity for steering needed federal support to the Gulf may be closing. But as advocates point out, the region still remains in dire straits.
The Gulf Coast Civic Works Campaign talked about the importance of the new legislation in a statement this week:

Levees remain vulnerable; tens of thousands of people have not been able to return home; schools, hospitals and transportation infrastructure remains damaged; and residents continue to struggle for access to affordable housing and living wage jobs.

Organizing for a true reconstruction in the Gulf Coast: An interview with labor leader Saket Soni

Advocates take the Gulf Coast cause to the Hill