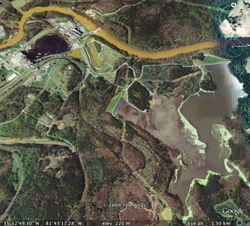 The Bush administration was reluctant to release information that suggested an alarmingly high cancer risk for people who live near landfills and lagoons used to store coal ash waste -- and now it turns out that it released only part of the data, hiding for years the full extent of the health threat from poorly regulated coal ash disposal.

That's one of the findings of an analysis released yesterday by the Environmental Integrity Project (EIP) and Earthjustice. Those groups have played a leading role in the effort to bring to light the environmental hazards of coal-ash storage facilities like the one that collapsed catastrophically last December at the Tennessee Valley Authority's Kingston plant in eastern Tennessee, dumping more than 1 billion gallons of toxic waste into a nearby community and river.

Environmental advocates have long tried to obtain information related to the dump sites' cancer risks, but the Bush administration's Environmental Protection Agency proved reluctant to release it. An EPA report completed in 2002 identified the considerable risks of coal ash dumps, but Freedom of Information Act requests for the data were denied or resulted in the release of documents with the cancer risk estimates blacked out. (To see one of the blacked-out documents provided by EIP, click here.)

A 2007 EPA assessment that drew on the earlier report found people living near coal ash dump sites have as much as a 1 in 50 chance of getting cancer from drinking water contaminated by arsenic, one of the most common and most dangerous pollutants in coal ash. It also found that living near coal ash ponds increases the risk of damage to the liver, kidney, lungs and other organs resulting from exposure to toxic metals from the ash, including cadmium, cobalt and lead.

Earlier this year, the EPA's full risk report was finally made public -- seven years after its internal publication. The EIP and Earthjustice released their analysis of that report yesterday, showing there are high-risk coal ash dump sites in at least 36 states. Twenty-one states -- including nine across the South -- are home to five or more such sites, which lack synthetic liners to keep poisons in the ash from seeping into the surrounding ecosystem and water supplies.

The problem may be even bigger than the data indicate, the groups said, noting that industry has reported at least 427 waste ponds in response to a March 2009 information request letter from EPA -- 40% more than EPA's own estimate of the number of operating ponds. In addition, the threat from these dumps could linger for a very long time, with EPA warning that peak exposures are likely to come 78 to 105 years after the dumps first begin operation.

"We now have the full picture about coal dump sites across America and it is not pretty," said EIP Director Eric Schaeffer. "Power industry lobbyists would rather keep the public in the dark about the risk from coal ash disposal; it's up to the EPA to turn the lights on and regulate these hazards."

In March, 109 environmental groups including EIP and Earthjustice asked EPA Administrator Lisa Jackson to move quickly to regulate coal ash. The letter identified 12 principles to guide the development of federal regulations, including phasing out surface impoundments like the one that failed at Kingston, mandating the use of synthetic liners, and requiring the industry to assume long-term liability for cleanup.

(The image above is a Google Earth view of Duke Energy's Cliffside coal-burning power plant, whose coal-ash dump is one of the high-risk facilities listed in the EIP and Earthjustice analysis. The coal-burning units are in the upper left and the coal ash waste impoundment on the right, with the Broad River near the top of the image. The plant is located near Mooresboro, N.C., on the border of Cleveland and Rutherford counties in the western part of the state.)