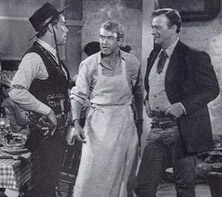 "This is the West, Sir. When the legend becomes fact, print the legend."
It may be one of the most famous movie lines from one of the least famous movies ... ever.
If nothing else, it gives that dying breed, the newspaper writer, a bit of a grin. Them's was the days ... maybe.
Edmond O'Brien plays the raffishly alcoholic editor of the Shinbone paper in John Ford's late-career classic, "The Man Who Shot Liberty Valance."
But it's a younger man -- an inheritor of O'Brien's proud windbag tradition -- who actually says the line. It's his "who-cares?" response to a story told by distinguished Sen. Ransom Stoddard (Jimmy Stewart) after explaining he's NOT the man who shot Liberty Valance. That honor -- and subsequent career-launching notoriety -- belongs to Tom Doniphon (John Wayne).
The senator, who is now (1910) being quietly talked up as a potential presidential candidate, has returned with his wife Hallie (Vera Miles) to Shinbone after almost 30 years or so. Their mission: to pay respects to thier deceased friend, an obscure local rancher named Doniphon.
The man who DID shoot Liberty Valance.
Stoddard owes his political career to a falsehood .... or a legend, to put it more kindly. Liberty Valance -- a feral, no-good gunslinger, played with a lethal snarl and wild-eyed swagger by Lee Marvin -- was a man who needed killing.
As the title song, pithily sung by Gene Pitney tells us, "When Liberty Valance rode to town, the women folk would hide//They'd hide. When Liberty Valance walked around, the men would step aside Because the point of a gun was the only law that Liberty understood. When it came to shooting straight and fast//He was mighty good."
One of Ford's last movies, "Liberty Valance" was one from the heart. Ford had created the myth of the Wild West almost single-handedly, in movies such as "Stagecoach," "My darling Clementine" and "The Searchers."
Now he was going to shoot it right between the eyes.
In a sense, Ford's mythic Old West has a lot in common with the Old South. Both share a colorful but chequered history, much of which is shrouded by hearsay and seemed-like-that.
Stewart's character is a young lawyer who, following Horace Greeley's "Go west, young man" dictum, comes to Shinbone where, even before getting into town, he's humiliated and almost beaten to death by the antic and rabid Valance and his gang. Tended to by Hallie and her immigrant parents, Stoddard ends up working in their restaurant as payback. In one of the film's most memorable scenes, he's tripped by Valance while carrying Doniphon his steak dinner. The seemingly minor incident explodes to the point of near violence, with guns drawn and threats uttered.
But Stoddard intercedes, avoiding bloodshed while, at the same time, bringing further humiliation on himself. He is, after all, wearing a frilly apron, just like a GIRL.
Here, in a nutshell, is Ford's ambivalence toward taming the Old West. He understands that dinner can no longer be settled by a gunfight. But he also says that civilization must adjust, too. It can't come courting in frilly aprons.
Yet it is the killing of Liberty Valance that gives civilization a foothold -- not lawyer's words, an editor's posturing or womanly ways.
The South, by contrast, found its mythology bound up in crinolines, whether it wanted to or not. Some of that can be laid squarely at the feet of one Peggy Mitchell and a certain green-eyed heroine.
But a lot of it is inevitable for the simple reason that the Civil War didn't stop at steak dinners and wasn't over in a matter of a few dark nights. It kept on going, killing fields for almost five years, that stripped a region of a generation (or more) of men and left a generation (or more) of women to remember.
To remember, it must be said, selectively, in ways good and bad. True and false. Inclusively and bigoted.
We all hold homegrown legends dear, even when we know better.
This article originally appeared in Likethedew.
Eleanor Ringel Cater has been a Georgia-based movie critic for 28 years. She has been a regular contributor to CNN, MSNBC, Entertainment Weekly, Headline News and WXIA, Atlanta's NBC affiliate, and a columnist for TV Guide.