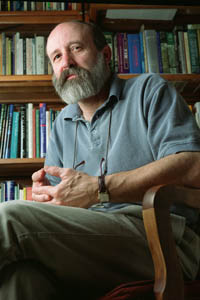 All things seen are real, said Walt Whitman, and in that spirit three decades ago, the Academy of American Poets presented the annual Walt Whitman Award to the writer of a book-length collection of poems, Shooting Rats at the Bibb County Dump.

Today, the author of that collection and its improbable title poem - David Bottoms of Canton - is Georgia's Poet Laureate, professor of creative writing and poetry at Georgia State University, and author of other highly regarded volumes, including Vagrant Grace, Armored Hearts, Easter Weekend and Under the Vulture-Tree. He is also founding co-editor of the literary publication Five Points.

The jolting image of shooting rats is proof enough that art's golden thread winds its way through the most banal of human activities -- even the back-roads rambling of young men carrying whisky and guns. Certainly that was the belief of Robert Penn Warren, the Academy's judge that year, who picked Bottoms' work from nearly 1,400 anonymous manuscripts submitted for the 1979 Walt Whitman Award.

The 2009 Walt Whitman winner, announced by the Academy on May 5, is J. Michael Hernandez of Colorado for his book-length collection of poems Heredities. The poems are based on the accounts of Hernán Cortés, the explorer whose credits include the fall of the Aztec empire. The judge, the poet Juan Felipe Herrera, describes Martinez' manuscript as "lit by metaphysical investigations" and a tour-de-force that "gives voice to a dismembered continental body buried long ago."

By contrast, David Bottoms liberates the sublime from the familiar, from moments fixed explicitly in times and places that readers themselves experience, i.e. the mundane is suddenly epiphanic. For example:

From a traffic jam on St. Simons bridge
I watched a fisherman break down his rod,
take bait-bucket in hand, and throw
to the pavement a catfish too small to keep.
As he walked to his car at the end of the bridge,
the fish jumped like a crippled frog, stopped
and sucked hard, straining to gill air.

Mud gathered on the belly. Sun dried the scaleless back
I took a beach towel from the back seat
and opened the car door, walked to the curb
where the catfish swimming on the sidewalk
lay like a document on evolution.
I picked it up in the towel
and watched the quiver of its pre-crawling,
felt whiskers groping in the darkness of the alien light,
then threw it high above the concrete railing
back to the current of our breathable past.

The Walt Whitman Award is a transformative honor that includes publication and distribution of the book though the Academy, $5,000 in cash and a one-month residency at the Vermont Studio Center. Louisiana State University Press will publish the 2009 winner, Heredities, in 2010.

After Bottoms' 1979 award, William Morrow & Company, Inc. published Shooting Rats at the Bibb County Dump. In the photo on the book jacket, Bottoms looks like a bluegrass guitar and banjo picker, which he was and we can assume, still is. If you go to the GSU English Department website, you'll see a strikingly similar photo - though the beard is not so dark and the cool hat is missing.

Bottoms graduated from Mercer University, then went on to teach and earn his doctorate at Florida State. In 2000, then-Gov. Roy Barnes appointed him Georgia Poet Laureate.

Here, at last, reader - if you've not already had the pleasure - is that title poem:

Loaded on beer and whiskey, we ride
to the dump in carloads
to turn our headlights across the wasted field,
freeze the startled eyes of rats against mounds of rubbish.
Shot in the head, they jump only once, lie still
like dead beer cans.
Shot in the gut or rump, they writhe and try to burrow
into garbage, hide in old truck tires,
rusty oil drums, cardboard boxes scattered across the mounds,
or else drag themselves on forelegs across our beams of light
toward the darkness at the edge of the dump.
It's the light they believe kills.
We drink and load again, let them crawl
for all they're worth into the darkness we're headed for.

This originally appeared in Likethedew.