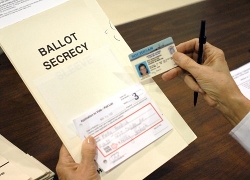 Following Arizona's lead, Georgia has passed a law requiring that all residents prove their citizenship before they can register to vote. This is the most restrictive form of voter ID yet, and it is far more restrictive than the photo ID requirements that have been passed across the country. It has been enacted even though there is no indication that non-citizen voting is a problem in the state; in fact, Georgia election officials are confident that the current photo ID requirement is strict enough to prevent any problems from arising.
Just how disenfranchising Georgia's new law will be is indicated by a national survey of voters conducted by the Brennan Center for Justice. The survey found:
Perhaps most troubling about this law is that it clearly constitutes a poll tax. Unlike the Indiana photo ID law that was upheld by the Supreme Court, there is no provision for issuing free citizenship documents to poor voters in Georgia. Any person wishing to register must supply proof of citizenship, even if they don't have enough money to obtain such proof.
Fortunately, the law will not go into effect until it has been reviewed by the US Dept of Justice. While DOJ cleared the Arizona proof-of-citizenship law in the Voting Rights Act's pre-clearance process (VRA section 5), Arizona's proof-of-citizenship law was approved by the then-Bush Administration DOJ. Observers expect the review to be far more probing this time given the new administration's stated commitment to voting rights.
Georgia's new law clearly illustrates the continuing need for Voting Rights Act pre-clearance, increasing the stakes in a coming Supreme Court decision on whether to strike down the pre-clearance provisions of the federal Voting Rights Act. Should the court strike down section 5, Georgia voters' last hope for preventing this law from going into effect will be lost. If that is the case, a legal challenge is likely.