Skip to main content
Join the voice for a changing South.
Donate Today
By Sue SturgisMay 28, 2009 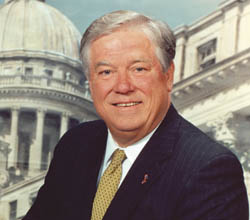 Speaking yesterday to an American Legion youth program in Jackson, Mississippi Gov. Haley Barbour said he has thought about running for president -- but that he won't think about it anymore until after 2010.

Adding to the speculation over a possible 2012 presidential bid by Barbour is the fact that he has scheduled trips to Iowa and New Hampshire next month to raise funds for those states' Republican parties, WLBT reports.

Barbour told the gathering that he was focused on upcoming gubernatorial elections in New Jersey and Virginia, where Democratic Gov. Tim Kaine can't run again because the state does not allow consecutive gubernatorial terms. In the June 9 Democratic primary, Virginia voters will choose someone from among former Democratic National Committee Chair Terry McAuliffe, longtime state Delegate Brian Moran and state Sen. Creigh Deeds for a fall face-off with Republican Bob McDonnell, a graduate of Rev. Pat Robertson's Regent University law school and the top recipient of Robertson's campaign cash.

But the AP noted that Barbour sounded at times as if he were making a stump speech. At one point he compared his background with that of President Obama, saying he thought it was more valuable for a president to come from a business background than from the Senate.

Before being elected governor in 2003, Barbour worked as a lawyer and lobbyist, founding Barbour & Rogers LLC, which went on to became one of the most powerful lobbying firms in Washington and earned millions working on behalf of the tobacco industry. He also chaired the Republican National Committee from 1993 to 1997 and engineered the GOP's capture of both the U.S. Senate and House for the first time since 1954.

Barbour has sparked various controversies during his time in politics, particularly around race and class issues. In 1982, while running a race for U.S. Senate that he eventually lost, a press aide complained to him that "coons" were going to be at a campaign stop at the state fair. In front of reporters, Barbour warned the aide to stop using racist language or he would be "reincarnated as a watermelon and placed at the mercy of blacks."

During his 2003 run for governor, Barbour again raised eyebrows when he spoke at the Blackhawk Rally, a fundraiser for a council school in Blackhawk, Miss. Also known as academies, these private schools were created by the White Citizens' Council movement to avoid racial integration. The rally was hosted by the Council of Conservative Citizens, which fought school integration.

In the wake of Hurricane Katrina, Barbour was widely praised for his success in responding to the disaster and in getting reconstruction funds for Mississippi. But as Chris Kromm and I reported in a 2007 story for Salon, the recovery in some of the state's hardest-hit areas was plagued with serious problems, with some small towns fearing bankruptcy. Barbour also raised the ire of his state's social justice advocates by diverting $600 million in federal funds from a program to help low-income homeowners who suffered losses in the storm in order to spruce up the state's port at Gulfport -- a move that led to a lawsuit filed late last year.

More recently, Barbour opposed President Obama's federal stimulus plan, joining his fellow Republican governors from Alabama, Louisiana, South Carolina and Texas in objecting to its expansion of unemployment benefits. Last month the unemployment rate in Mississippi fell slightly to 8.6% to match the U.S. rate, though rates were still as high as 11.4% in some Delta counties.

A 2007 report by the U.S. Census Bureau found that Mississippi was the poorest state in the nation, with a median household income of $34,473 and a per capita income of $9,432. Poverty is an even greater problem for African-Americans in Mississippi, where a typical black woman earns less today than the typical American in 1960, and where infant mortality rates for nonwhites are about the same as Libya.

Barbour is currently involved in the Republican Party's National Council for a New America, a controversial initiative of House Minority Whip Eric Kantor (R-Va.) that aims to re-brand the GOP as more inclusive and forward-looking.

(Photo of Haley Barbour from the Mississippi governor's office)

Trump is erasing racial diversity from the South's federal courts