Skip to main content
Defend democracy in the South.
Donate Today
By Chris KrommMay 27, 2009
Political pundits routinely dismiss the South as a region that's losing relevance -- but the U.S. public appears to have missed the memo.

In various surveys and rankings, Southern states consistently score near the top among the best places to live and work. The public seems to be listening -- Southern states are among the fastest-growing in the country.

The latest survey to give the South props is Kiplinger's annual ranking of "Best Cities." The focus this year was on best cities to find jobs, and Southern metro areas make up half of the list:

Last year's list -- which came out before the economy really tanked -- more whimsically looked at the "Best Cities to Live, Work and Play." Houston and Raleigh topped that list, which also included Austin and Fayetteville, Arkansas.

This reflects a way in which political punditry is out of step with general public. The political class endlessly chatters about the South's marginalization in Washington -- at the very time that millions of people are flocking to the region. Clearly, a growing share of the public doesn't think the South is "marginal."

For example, look at this study of migration trends within the United States published by Pew last December: 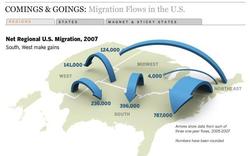 And of course, those growing numbers also translate into rising political clout, as the 2010 Census -- which is projected to add up to nine Congressional seats and Electoral College votes in the South -- will make plain.

The racist roots of 'right to work' laws

North Carolina: Best place for democracy in the South?