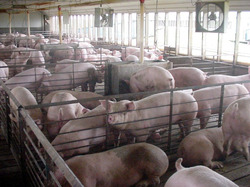 Writing about swine flu last week, we observed that massive hog farms like those clustered near the outbreak's epicenter in the Mexican state of Veracruz "can act as a vector for environmental injustice," and pointed to studies done in North Carolina -- the nation's second-biggest producer of hogs after Iowa -- that found such farms put nearby residents at risk of serious health problems and tend to be concentrated in communities with high poverty rates and a high percentage of racial minorities.

The Raleigh (N.C.) News & Observer reported that a virus related to the current outbreak was first identified a decade ago at a farm in the eastern North Carolina county. The N&O cited Raul Rabadan, a Columbia University scientist who's studying the new virus's genetics:

"This virus was found in pigs here in the United States," Rabadan said in an interview. "They were getting sick in 1998. It became a swine virus."

It spread among pregnant sows in Newton Grove, N.C., causing them to abort their litters. The virus then spread to pigs in Texas, Iowa and Minnesota -- putting epidemiologists on alert about the new viral strain and the potential for a human outbreak.

A May 1999 N&O story titled "Disease detectives untangle mystery of mutant flu virus" (available in the paper's online archives) reported that the 1998 bug -- a pig virus "wrapped in a shell of human proteins"  -- was isolated by a state government veterinary lab. Similar mutations are suspected in earlier flu outbreaks, including the 1918 Spanish flu that killed more than 20 million people worldwide.

According to that story, the virus was discovered in August 1998 at a 2,400-sow breeding farm owned by Newton Grove, N.C.-based Hog Slat Inc., a leading builder of factory-style hog farms. The company is also one of Sampson County's largest employers -- as is Smithfield Foods, the Virginia-based corporation that owns numerous hog farms near the Mexican community where the earliest case of the current swine flu was identified.

The 1998 North Carolina outbreak began with pregnant sows developing high fevers. A state microbiologist who tested nasal samples taken from the animals was surprised to encounter a virus he didn't recognize -- and his alarm grew when he found that some of the sick animals had been immunized for ordinary swine flu, the N&O reported:

He was concerned for good reason.

Pigs are considered by most virologists to be the primary source of deadly influenza pandemics in humans. Unlike epidemics, which are usually isolated within specific areas, pandemics spread quickly and can cover the world within a few months.

Those pandemic influenza viruses aren't believed to originate with the pigs, however. Most flu bugs that have infected humans in the past have been traced back to aquatic birds such as ducks and geese, suspected as the reservoir for almost all strains of human flu.

But because they are so genetically different, it is extremely difficult for viruses to jump directly from birds to people. That's where pigs come in.

The H1N1 virus behind the current flu outbreak contains genetic material from birds, humans and pigs, though it's called "swine flu" because it's a type of virus that typically infects hogs.

The state microbiologist investigating the 1998 outbreak sent samples of the virus to Dr. Robert Webster, a leading virologist at St. Jude's Children's Research Hospital in Memphis, Tenn. Webster identified them as a mix of human and swine virus and concluded the virus had originated in humans before jumping to pigs.

North Carolina public health officials tested workers at the Hog Slat farm who had come in contact with the infected pigs. Those tests showed that 10% of the workers had developed antibodies to the virus, meaning they had been infected although they apparently hadn't become ill.

At the time, health experts said they did not believe the new virus posed a threat to humans -- but admitted the potential was there for future problems:

"We don't know how often these reassortments occur in nature -- probably more than we want to realize," said Dr. Newton MacCormack, chief of the communicable disease control section of the state Department of Health and Human Services.

"We're pretty lucky in that most of these viruses reach a genetic dead end," he said. "The big problem is the rare occasion when one of these viruses gets into a human and begins to be passed from person to person."

But fortunately, it appears we may get lucky again, as the World Health Organization has said community-level transmissions appear to be occurring only in the United States, Mexico and Canada, according to the Washington Post. And the U.S. Centers for Disease Control and Prevention reported yesterday that the outbreak appears to be milder than initially feared.

The fact that the virus is turning out to be not as bad as it could have been have led some to decry what they consider "hysteria" over the current outbreak. They include U.S. Rep. Ron Paul (R-Texas), who recently called the reaction to the flu "overblown." However, President Obama said the response was justified by the risk presented by a new virus for which people lack natural immunity.

While we agree that overreacting to swine flu is not helpful, neither should this be a moment for complacency -- not given the very real problems the outbreak illuminates. There's a issue here just as critical as whether governments should discourage people from visiting crowded places during a flu outbreak, and that's how governments should best regulate factory farms.

Crowding thousands of pigs into cramped, filthy quarters creates ideal conditions for the fast spread of potentially dangerous viruses. The Humane Society of the United States points out that the unnatural density of such operations enables the large viral loads considered necessary for the emergence of rare flu mutations that can then spread rapidly among animals. The crowded conditions also stress the animals' immune systems, while the enormous quantities of decaying fecal waste predisposes them to respiratory infections and the lack of sunlight allows viruses to thrive. In addition, the industry's heavy reliance on pharmaceutical drugs and vaccines immunologically pressures the virus to mutate. And the flies and other pests attracted to such operations may be able to pick up viruses and carry them for miles.

A report released last year by the Pew Commission on Industrial Farm Animal Production warned of the risks of inadequate U.S. regulation of such operations. It noted that workers at industrial animal farms can serve as a "bridging population," transmitting animal-borne diseases to a wider community. It also pointed to problems with disposing of animal waste, which industrial hog farms typically collect in enormous open-pit lagoons and spray on farm fields, putting nearby waters at risk of contamination with pollutants including viruses.

And lagoons sometimes fail catastrophically, spreading contamination over large areas. For example, a spill from Sampson County's Bearskin Farms in 1995 resulted in the release of about a million gallons of hog waste into a tributary of the Cape Fear River. And that wasn't even the state's worst hog waste spill, a distinction held by Oceanview Farms in coastal Onslow County, where a 1995 lagoon failure contaminated the New River with 22 million gallons of hog waste -- twice the amount of pollution spilled from the Exxon Valdez. The Oceanview disaster killed 15 million fish and closed almost 365,000 acres of coastal wetlands to shellfishing.

In 2007, after years of work by environmental advocates, North Carolina became the first state in the country to ban the construction or expansion of lagoons and sprayfields on hog farms under the Swine Farm Environmental Performance Standards Act. But that law doesn't require the closure of existing lagoons, which remain a very real environmental health threat to numerous rural communities. And of course, the law does nothing to address problems at hog farms in Mexico.

The Pew report offered a number of recommendations to reduce the factory farms' threat to the public, including improved disease monitoring and tracking, improved regulation, and phasing out of intensive confinement. Bob Martin, who directed the Pew study, told the N&O that the latest outbreak shows action is needed, given the very real potential for dangerous viral mixing at industrial hog farms:

"It's a matter of when, not if," Martin said. "The structure of the system is the problem."

If nothing else, the latest swine flu outbreak should spur governments to begin building a safer, more sustainable agricultural structure. And they must reach across national lines to do so, since neither agribusiness nor viruses are held back by borders.