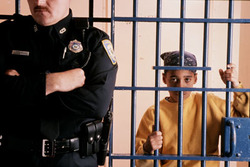 Four years ago, the U.S. Supreme Court took a big step toward righting a galling wrong. It joined nearly every other nation on the globe and banned teen executions. Now it should take the next big step and dump all laws that let states lock up juvenile offenders for the rest of their life.

The Court will rule on two Florida cases, where juvenile offenders got no-parole life sentences. The two cases point to the often-appalling legal and racial inequities in the juvenile no-parole sentencing. The two men committed crimes when they were 17 years old. The crimes were violent crimes; a rape and an armed home invasion robbery. But in both cases, the evidence, testimony and witness identification were muddled and contradictory. They were still convicted and have spent more than a decade in prison.

As is the case with the death penalty, the no-parole sentences are far from race neutral. In the Florida case, both men are African American. Black teens are 10 times more likely to receive a no-parole life sentence than white youths. They are even more likely to get those sentences when their victims are white. This was the case in the Florida convictions, and they are often tried by all-white or mostly-white juries. Those same juries seldom consider their age as a mitigating factor.

A significant number of juveniles sentenced to no-parole sentences did not actually commit murder but were participants in a robbery or were at the scene of the crime when the death occurred. The majority of the teens slapped with the draconian sentence had no prior convictions, and a substantial number were age 15 or under.

Judges and juries say that violence is violence no matter the age of the perpetrator, and that punishment must be severe to deter crime. Prosecutors and courts in the 40 states that convict and impose no-parole life sentences on juvenile offenders -- with California, Pennsylvania, Louisiana, Michigan, and Florida leading the pack -- have repeatedly rejected challenges that teen no-parole sentences are a violation of the constitutional prohibition against cruel and unusual punishment.

Though murder rates have plunged to near record lows, the public remains anxious of violent crimes, especially young persons who commit them. Lawmakers are loath to do anything that will bring public heat on them that they are soft on crime. This is still considered the kiss of death for political careers.

Yet most experts agree that children don't have the same maturity, judgment, or emotional development as adults. In a report on juveniles and the death penalty, Amnesty International found that a number of child offenders sentenced to death suffered severe physical or sexual abuse. Many others were alcohol or drug impaired, or suffered from acute mental illness or brain damage. Nearly all were below average intelligence.

Despite Hollywood sensationalism and media-driven myths about rampaging youth, most experts insist that children are not natural-born predators. If given proper treatment, counseling, skills training and education, most can be turned into productive adults.

An irony in the Supreme Court's 2005 ban on executing teen killers was that the ban actually worked against no-parole reform efforts. Since states could no longer execute juvenile offenders, then the legal thinking was that it was far more humane to sentence them to life sentences. Victims' rights advocacy groups claim that taking away the option of no- parole sentences for juveniles will weaken crime deterrents. This makes it even tougher to make the case that counseling, treatment, and education is the more effective way to redeem young people who commit crimes than harsh sentencing -- but it is.

And there's the gnawing question of race. The racial gap between black and white juvenile offenders is vast and troubling. The rush to toss the key on black juveniles has had terrible consequences in black communities. It has increased poverty, fractured families, and further criminalized a generation of young black men.

No matter what their age, those who commit crimes -- especially murder -- must be punished, but the punishment should not only fit the crime, it should also fit the age of the person who committed it, and the circumstances that drove them to commit their offenses. If juvenile offenders with the right help can turn their life around, they deserve that chance, and judges should be able to give it to them.

The Supreme Court in its decision to ban juvenile executions called teen executions "shameful." They recognized that the practice cannot, and should not, be justified on moral or legal grounds, and that it was past time to put a stop to them. The Court should recognize the same with the no-parole sentence for teens and outlaw it.

VOICES: The long struggle to read in Alabama's prisons

VOICES: Life without parole for teens is uncivilized