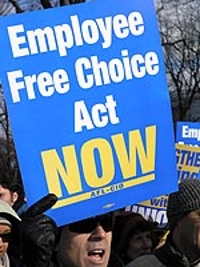 It seems relatively simple. The proposed federal Employee Free Choice Act would give employees the freedom to form a union when a majority of workers sign cards saying that they want one, avoiding the often months of employer harassment that have inevitably accompanied traditional National Labor Relations Board (NLRB) election processes.
Ignoring Evidence of Majority Sign-up Success in the States: Yet the anti-union lobby in Washington, D.C. has been churning out propaganda about the supposed horrors of coercion workers would face by unions if the Employee Free Choice Act was enacted. They inevitably tell hypothetical stories about what could happen -- but studiously ignore the fact that states around the country already allow groups of public and private employees to form unions through majority sign-up procedures without any evidence of the coercion they conjure up.
Just to reinforce the lack of evidence of union coercion, a new report from the University of Illinois at Urbana-Champaign was released this week examining the whole history of majority sign-up in that state. The report found that between the years 2003 and 2009, 21,197 public sector workers used majority sign-up procedures allowed by state law to form unions with only one complaint about union coercion filed during that whole period -- and even that complaint was dismissed as without merit by the state Labor Relations Board.
In fact, across the country since 2003, half a million workers have formed unions using majority sign-up procedures, either under state law or through voluntary agreements made with employers, and there is no significant evidence of union coercion under the process. If there was, you can bet the anti-union lobby would be citing those problems every day, yet instead they attempt to ignore the existing success of majority sign-up procedures for workers who have access to them.
Coercion by Employers under Federal NLRB Procedures: Compare this to the existing National Labor Relations Board process where an estimated one-in-five union organizers or activists can expect to be fired as a result of their activities in a union election campaign. A 2000 Human Rights Watch report said the failure to protect workers under U.S. election procedures was so profound that the so-called secret ballot election" process failed to meet international human rights standards. Just this week, the Center for American Progress Action Fund released an animation illustrating how brutal present NLRB procedures are for workers.
Promoting Freedom to Form Unions: Given the benefits of unionization in raising wages, spreading majority sign-up at both the federal and state level to put more money in household budgets and stimulate the economy should be an imperative for all elected leaders.
State laws allowing majority sign-up for groups of public and private employees have been enacted in California, Connecticut, Illinois, Iowa, Kansas, Maryland, Massachusetts, Michigan, Minnesota, Montana, New Hampshire, Nevada, New Jersey, New York, North Dakota, Ohio, Oklahoma, Oregon, Washington, and Wisconsin. Examples of these statutes include Oregon Revised Statutes, 243.682 for public employees and New York Chapter 31, Article 20, Section 705 covering both public employees and a number of private industries. So you've got one system -- NLRB elections with a demonstrated history of massive, overwhelming employer abuse -- and another system -- majority signup operating in many states with noevidence of any of the abuses alleged by opponents. If it works in the states, why not bring its benefits to more employes?