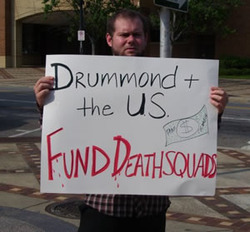 In a case that gives a whole new meaning to the term "dirty coal," a federal lawsuit filed last week against the Drummond Co. of Birmingham, Ala. alleges that the coal company paid millions of dollars to a Colombian paramilitary terrorist group responsible for the deaths of 67 people in an effort to disrupt union activities at its South American mine and railway operations.

This is the third lawsuit the privately held company has faced over charges of being involved in human rights abuses in civil war-torn Colombia. A similar suit filed in 2007 by a Colombian labor union and families of murdered miners ended with a verdict for Drummond. Earlier this year, the company was also sued by children of three slain Colombian miners.

Brought by the Conrad & Scherer firm of Fort Lauderdale, Fla., the latest lawsuit accuses Drummond of paying the right-wing United Self Defense Forces of Colombia -- known by its Spanish acronym AUC -- to protect its business interests by terrorizing and killing union supporters. The suit offers details on a meeting between Drummond and AUC representatives during which the company allegedly ordered the execution of two union leaders.

"The 60-page complaint outlines allegation after allegation of brutality, describing how hundreds of men, women and children were terrorized in their homes, on their way to and from work, and often murdered by AUC paramilitaries acting on behalf of Drummond," said the plaintiffs' attorney Terry Collingsworth. "These are innocent people being killed in or near their homes or kidnapped to never to return home, their spouses and children being beaten and tied up, and people being pulled off buses and summarily executed on the spot."

The civil action was filed on behalf of 252 plaintiffs who are relatives of the 67 victims; the plaintiffs' names are being withheld to prevent reprisals against them. The lawsuit was filed in U.S. District Court for the Northern District of Alabama's Western Division.

Drummond has denied the charges leveled by the suit, noting that violence has long plagued Colombia and saying the company has no connection to it. Drummond operates the Shoal Creek mine in Alabama's Jefferson County and the Pribbenow mine in northern Colombia.

Drummond is not the first U.S. company to face charges of colluding with right-wing death squads in Colombia. In 2007, Chiquita Brands International of Ohio pleaded guilty to making illegal payments to the AUC from 1997 to 2004, when it was forced to stop after a board member reported the payments to the U.S. Justice Department. As part of a settlement, Chiquita agreed to pay a fine of $25 million and cut its ties to the Colombian entities that were working with the AUC. Another civil lawsuit is currently pending against Chiquita in U.S. District Court in Miami brought on behalf of additional AUC victims, also represented by Conrad & Scherer.

"This type of corporate behavior unfortunately was not unusual for foreign companies doing business inside Colombia at that time, as paramilitary groups pretty much acted with impunity from government intervention," said Conrad & Scherer founding partner William Scherer.

Testifying before the U.S. House of Representatives earlier this year on violence against Colombian union leaders, Maria McFarland Sánchez-Moreno of Human Rights Watch noted that the country has the world's highest rate of trade unionist killings. Since 1986, more than 2,694 unionists have been killed with another 4,200 reportedly receiving threats.

Those numbers appear to be on the rise again following a decline. The number of Colombian unionist killings jumped to 49 in 2008, a 25% increase over the 39 killings in 2007. Also last year, the number of threats against unionists jumped to 485 -- almost double the 246 recorded in 2007.

An important factor in the continuing violence is the overwhelming impunity for perpetrators, with 96% of all trade unionist killings in Colombia unsolved, McFarland Sánchez-Moreno said. Another factor is the rhetoric of Colombian leaders who stigmatize legitimate union activity as a cover for the abusive left-wing guerrillas.

These human rights concerns loom large over the U.S.-Colombia Free Trade Agreement, a proposed treaty that if ratified would eliminate tariffs and other barriers in trade between the two countries. Congress is expected to consider the pact later this year, with U.S. labor pushing to block ratification because of the anti-unionist violence in Colombia. An analysis in a recent issue of The Kiplinger Letter said that the odds Congress will ratify the deal are "improving" as the White House makes an "aggressive push" for approval -- as much for diplomatic as economic reasons.

However, Human Rights Watch has called on Congress to delay consideration of the agreement until Colombia shows results in addressing the violence against unionists, in prosecuting crimes against unionists, and in human rights protections more generally.

(Photo of a 2007 protest against Drummond in Birmingham, Ala. from Fight Back News)

Getting even tougher on corporate crime