Skip to main content
Defend democracy in the South.
Donate Today
By Guest BloggerJune 5, 2009
By Dallas Lee, Georgia Online News Service
Emily Dickinson's dictum "Tell all the truth but tell it slant" is wise counsel for writers sidling into the thickets of politics and religion. "The Truth must dazzle gradually/Or every man be blind." 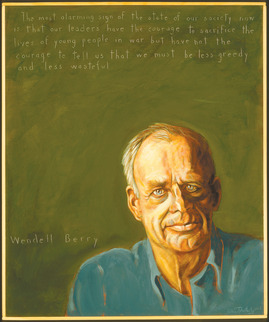 Well, Kentucky farmer and poet Wendell Berry would sooner strike us sightless - knock us off our asses like Saul on the road to Damascus - to stop the heedless plundering of the earth.
It is the destruction of the world
In our own lives
that drives us half insane, and more than half.
To destroy that which we were given
in trust: how will we bear it?
We have so ravaged the path out of Eden, Berry says, that few signposts remain showing the way home. We've lost touch with the earth as mother and friend, as provider of the air, water and land that we share with all other living things. We eat and drink with little regard for the source of nourishment or the consequence of process. We're so hell-bent on progress as defined by scale that we strive ceaselessly to bend nature to our will, versus bending our will to nature's gifts and limits.
It is our own bodies that we give
to be broken,
our bodies existing before and after us
in clod and cloud, worm and tree,
that we, driving or driven, despise
in our greed to live, our haste
to die. To have lost, wantonly,
the ancient forests, the vast grasslands
in our madness, the presence
in our very bodies of our grief.

The poem, which I just egregiously interrupted with narrative, is from A Timbered Choir: The Sabbath Poems 1979-1997, a remarkable book of beauty, praise and gut-wrenching confrontation with both the loss and the promise of "place" in our lives. Berry's poems, like his essays, make clear that questions of preserving and respecting the environment are fundamentally religious.
"I am uneasy with the term," Berry writes in a classic essay, A Native Hill, "for such religion as has been openly practiced in this part of the world has promoted and fed upon a destructive schism between body and soul, Heaven and earth ... And so people who might have been expected to care most selflessly for the world have had their minds turned elsewhere - to a pursuit of 'salvation' that was really only another form of gluttony and self-love, the desire to perpetuate their lives beyond the life of the world. The Heaven-bent have abused the earth thoughtlessly, by inattention, and their negligence has permitted and encouraged others to abuse it deliberately."
In that same essay, Berry regretfully critiques the first Kentucky road builders, who with mindless excess in the late 1790s destroyed the thick hickory forests for temporary shelters and bonfires. "The idea was that when faced with abundance one should consume abundantly - an idea that has survived to become the basis of our present economy," he wrote. "It is neither natural nor civilized, and even from a 'practical' point of view it is to the last degree brutalizing and stupid."
The road builders, he says, were "placeless" people. "Having left Europe far behind, they had not yet in any meaningful sense arrived in America, not yet having devoted themselves to any part of it in a way that would produce the intricate knowledge of it necessary to live in it without destroying it. Because they belonged to no place, it was almost inevitable that they should behave violently toward the places they came to. We still have not, in any meaningful way, arrived in America."
Every place had been displaced,
every love unloved, every vow unsworn, every word unmeant
to make way for the passage of the crowd
of the individuated, the autonomous, the self-actuated, the homeless
with their many eyes opened only toward the objective
which they did not yet perceive in the far distance,
having never known where they were going,
having never known where they came from.
Berry's agrarian sensibility is not anti-urban. He's not a prophet urging everyone back to the wild. On the contrary, he's a prophet crying in the wilderness on behalf of the wilderness, beckoning us to slow our wasteful haste and learn from nature's timeless patience. Place is less about geography, more about slowing down to live with patience, and with stewardship and great care of the living world around us.

There appears to be a law that when creatures have reached the level of consciousness, as men have, they must become conscious of the creation; they must learn how they fit into it and what its needs are and what it requires of them, or else pay a terrible penalty: the spirit of creation will go out of them, and they will become destructive; the very earth will depart from then and go where they cannot follow ...

Once the creator was removed from the creation, divinity became only a remote abstraction, a social weapon in the hands of the religious institutions ... So that a man, while pursuing Heaven with the sublime appetite he thought of as his soul, could turn his heart against his neighbors and his hands against the world. For these reasons, though I know that my questions are religious, I dislike having to say that they are.

But when I ask them my aim is not primarily to get to Heaven. Though Heaven is certainly more important than the earth if all they say about it is true, it is still morally incidental to it and dependent on it, and I can only imagine it and desire it in terms of what I know of the earth. And so my questions do not aspire beyond the earth. They aspire toward it and into it. Perhaps they aspire through it. They are religious because they are asked at the limit of what I know; they acknowledge mystery and honor its presence in the creation; they are spoken in reverence for the order and grace that I see, and that I trust beyond my power to see.

Excerpted from The Native Hill, in the The Art of the Commonplace, the Agrarian Essays of Wendell Berry. Counterpoint. Berkeley. 2002.

Life forgives its depredations;
new-shaped by loss, goes on.
Luther Penn, our neighbor
still in our minds, will not
come down to the creek mouth to fish
in April anymore. The year
ripens. Leaves fall. In openings
where old trees were cut down,
showing the ground to the sky,
snakeroot blooms white,
giving shine unto the world.
Ant and beetle scuttle through
heroic passages, go to dust;
their armor tumbles in the mold.
Broad wings enter the grove, gold
and are still, open and go.
A sequence threads through A Native Hill - small touchstones in Berry's lyrical musings that enchant, enlighten, and turn a reader's spirit back toward home. Path... Stream... Topsoil. You don't have to live on the farm to get it. Here's a taste of what I mean:

"A path is little more than a habit that comes with knowledge of a place. It is a sort of ritual of familiarity ... It is not destructive. It is the perfect adaptation, through experience and familiarity, of movement to place; it obeys the natural contours; such obstacles as it meets it goes around. A road, on the other hand, even the most primitive road, embodies a resistance against the landscape. Its reason is not simply the necessity for movement, but of haste ... Such homes and farmlands and woodlands as happened to be in its way are now buried under it."

"My mind is never empty or idle at the joinings of streams. Here is the work of the world going on. The creation is felt, alive and intent on its materials, in such places... The fork of the stream lies at the foot of the slope like hammer and chisel laid down at the foot of a finished sculpture. But the stream is no dead tool; it is alive, it is still at its work. Put your hand to it to learn the health of this part of the world. It is the wrist of the hill."

"The most exemplary nature is that of topsoil. It is very Christ-like in its passivity and beneficence, and in the penetrating energy that issues out of its peaceableness. It increases by experience, by the passage of seasons over it, growth rising out of it and returning to it, not by ambition or aggressiveness. It is enriched by all things that die and enter into it. It keeps the past, not as history or as memory, but as richness, new possibility. Its fertility is always building up out of death into promise. Death is the bridge or the tunnel by which its past enters its future."

The old forests are all gone - metamorphosed into cash, as Berry says. "We will never know them as they were. We have driven them beyond the reach of our minds."
Earth will survive this carelessness, as it has countless other destructive epochs. The question is, will we?
Slowly, slowly, they return
To the small woodland let alone:
Great trees, outspreading and upright,
Apostles of the living light.
Patient as stars, they build in air
Tier after tier a timbered choir,
Stout beams upholding weightless grace
Of song, a blessing on this place.
They stand in waiting all around,
Uprisings of their native ground,
Downcomings of the distant light;
They are the advent they await.
Receiving sun and giving shade,
Their life's a benefaction made,
And is a benediction said
Over the living and the dead.
In fall their brightened leaves, released
Fly down the wind, and we are pleased
To walk on radiance, amazed.
O light come down to earth, be praised.
###

We live by mercy if we live.
To that we have no fit reply
But working well and giving thanks,
Loving God, loving one another,
To keep Creation's neighborhood.
And my friend David Kline told me,
"It falls strangely on Amish ears,
This talk of how you find yourself.
We Amish, after all, don't try
To find ourselves. We try to lose
Ourselves" - and thus are lost within
The found world of sunlight and rain
Where fields are green and then are ripe,
And the people eat together by
The Charity of God, who is kind
Even to those who give no thanks.
In morning light, men in dark clothes
Go out among the beasts and fields.
Lest the community be lost,
Each day they must work out the bond
Between goods and their price: the garden
Weeded by sweat is flowerbright;
The wheat shocked in shorn fields, clover
Is growing where wheat grew; the crib
Is golden with the gathered corn,
While in the world of the found selves,
Lost to the sunlit, rainy world,
The motor-driven cannot stop.
This is the world where value is
Abstract, and preys on things, and things
Are changed to thoughts that have a price.
Cost + greed - fear = price:
Maury Telleen thus laid it out.
The need to balance greed and fear
Affords no stopping place, no rest,
And need increases as we fail.
But now, in summer dusk, a man
Whose hair and beard curl like spring ferns
Sits under the yard trees, at rest,
His smallest daughter on his lap.
This is because he rose at dawn,
Cared for his own, helped his neighbors,
Worked much, spent little, kept his peace.

From A Timbered Choir, by Wendell Berry

This review originally appeared in Likethedew.