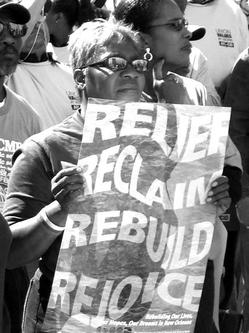 I just got back from New Orleans, meeting with a wonderful group of local and national advocates looking into how to make the city's recovery more fair, democratic and accountable.

The rest of us could learn a lot from the fitful and frustrating rebuilding process in the Gulf Coast. The economic crisis gripping the country isn't new to people in south Louisiana and Mississippi -- they've been living in a state of economic turmoil (as well as political, social and emotional) for almost four years. Some 85,000 residential addresses in Orleans and St. Bernard Parishes remain blighted [pdf].

It started with Hurricane Katrina, but much of the hardship today is due to forces a lot like those which have plunged the country into a Great Recession -- unregulated greed, bureaucratic neglect and a broad lack of political will to take bold action when needed. (In the case of Katrina, a bi-partisan Congressional panel delicately called it a "failure of initiative.")

But the Katrina recovery also foundered because it failed to give Gulf residents the tools and spaces to participate, to have a say in rebuilding their own future.

In New Orleans, for months -- and even years -- residents didn't know where to turn for information on where and how to get money to rebuild their homes, where to send their kids to school, how to find out if their drinking water was safe. Chaotic, free-wheeling city planning meetings like one I attended in 2006 left out the majority of residents and fostered an individualistic, "me first" approach -- instead of offering a space for residents to talk about their common vision for their neighborhoods and the city.

Fortunately, dozens of people and nonprofits jumped into the vacuum. This week I talked with people from many of these excellent groups, like the Greater New Orleans Community Data Center and LouisianaRebuilds who emerged as critical clearinghouses of information.

These and other groups, like us at the Institute for Southern Studies, also tried to track where the money was going. In 2007, we published a widely-covered report that found only 30% of money spent on Katrina was focused on long-term rebuilding, and only half of that had been spent. Today, groups like ProPublica are echoing this work in their efforts to track stimulus spending.

Katrina's message was clear: Transparency and accountability are critical ingredients to a successful recovery. But the Katrina experience also provides a second lesson: Giving people information and data isn't enough.

This week in New Orleans, a common theme was that people don't just need facts and analysis -- they also need a way to to discuss, debate and act on what they've learned.

Less than a year after Katrina hit, I interviewed Khalil Shahyd, a young organizer in New Orleans, for a piece I was writing about the politics of post-Katrina rebuilding. Khalil was frustrated with the city's undemocratic and scatter-shot approach to recovery. From his study of planning models in Brazil and India, he also knew it could be different: Katrina was a chance to try new, innovative approaches like participatory budgeting that would get people invested and involved in their own city's reconstruction.

By and large, it was a road not taken; to this day, many aspects of Gulf recovery remain frustratingly obscure. But Khalil is now organizing with the New Orleans Citizen Participation Project, which is attempting to revive the idea of public participation in recovery decision-making. As the Project says on their website:

Citizen Participation requires that neighborhood and community residents be enabled to take part in the planning and monitoring of public and private developments, projects and programs ... It allows citizens to have a greater say in government decision-making and priority-setting. In addition, it gives local officials an effective means of communicating with residents and for receiving information back from them.

Real public involvement in decision-making? A formal channel to ensure officials communicate with their constituents, heightening the openness and efficiency of government? New Orleans isn't the only place that could benefit from such ideas: From Flint, Michigan to Charlotte, North Carolina, communities facing wrenching dislocations and grave questions about their future might find such experiments in democracy could be their best weapon against fear and hopelessness.

Katrina has a lesson for us all: Real recovery isn't just about stimulus budgets and economic formulas -- it's about real people, who have a right and desire to participate in decisions that affect their lives. Our best recovery plan is more openness, more transparency -- and more democracy.

Dispatch from New Orleans: No red carpet for Obama in the Big Easy