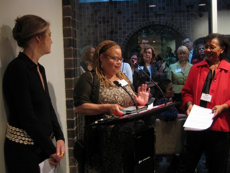 A big congratulations to Pam Spaulding for receiving a Women's Media Center award this week for her fabulous blog Pam's House Blend, which covers lesbian, gay, bisexual and transgender politics from the perspective of an African-American lesbian living in the South.

Pam is a board member of the nonprofit Institute for Southern Studies, which publishes Facing South. For her day job, the native Durham, N.C. resident works as the IT manager at Duke University Press.

The WMC noted that Pam gets the conversation about LGBT politics "out of the NY/DC corridor." And as Pam said in her acceptance speech at Wednesday's award ceremony:

...I think what is most heartening is about being recognized for this award is because it's about new media. This is a category, a much maligned category, of 'journalism slash commentary, original reporting and muckraking' and we do a lot of it at the Blend.

Other honorees included Candy Crowley of CNN, Bonnie Erbe of PBS and Rebecca Traister of Salon.

The WMC was founded in 2005 as a nonprofit progressive women's media organization by writer-activists Jane Fonda, Robin Morgan and Gloria Steinem to address what they call the "crisis of representation" in the media. They point out that while women represent 65% of all undergrad and graduate journalism and mass communications students, they earned only 25% of all new media jobs created from 1990 to 2005 and hold less than 3% of high-level decision-making media positions.