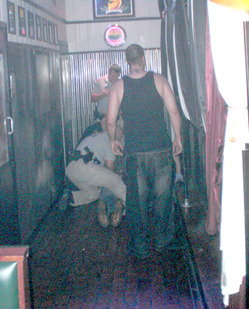 Is this what the police in Fort Worth, TX call "Stonewall Commemoration"? A gay club called the Rainbow Lounge opened in the city and Todd Camp, the founder of Q Cinema and former reporter for the Fort Worth Star-Telegram, was celebrating his birthday at the club and two Stonewall docs were being screened.

That evening the Fort Worth Police decided to pay a visit and re-enact good-old-fashioned "law enforcement." Camp told the local LGBT news outlet The Dallas Voice about the incident: Photo of police pinning a patron to the ground. (by Chuck Potter via The Dallas Voice).

The not awesome thing was the paddy wagon of homophobic police that showed up ... looking for trouble. My group and I were sitting on the back patio at a picnic table. Nobody was being wild out there. [The police] came through with flashlights, being loud asking what was going on out here, then asked why everyone was all the sudden being quiet. When one group started up their conversations again, they took one guy away. I left shortly after and as I walked through the front bar there were numerous cops with plastic handcuffs all ready to go. I [left] the bar and they [had] a big van in the parking lot and numerous cars on the street. And just so you know, it wasn't fire hazard crowded or seedy wild in there. ... The worst part is [friends later told me] that [the police] had numerous people face down on the ground outside. I just moved to Fort Worth from Dallas, so this is such a shock to me. I know Dallas would not put up with this...I am still so shocked it is 2009 and this just happened.

An eyewitness said that she was initially pleased to see the police, thinking they were there to protect patrons since the bar was in a rough part of town. That quickly changed.

She asked why they were there and he said a disgruntled employee had said that the bar was overserving people.  She told him she had been drinking but that she had a designated driver.  He told her that she was fine.  She said they only arrested men and seemed to be targeting effeminate men.

Another patron, Chad Gibson, was slammed to the floor by the cops and his sister reported to the Voice that he was hospitalized and has bleeding in his brain. And what does the police department have to say about this incident?

The statement also said that "an extremely intoxicated patron made sexually explicit movements toward the police supervisor" and that person was arrested for public intoxication.

The statement said that while some officers were outside dealing with the vomiting suspect, another officer inside requested assistance in handling an intoxicated patron who was resisting arrest, and that this person was "placed on the ground to control and apprehend him."

Eyewitnesses, not surprisingly, viewed that interpretation of events quite differently, saying Gibson weighed "maybe 160 pounds soaking wet" and didn't resist, but stumbled when one officer grabbed him by the arm. And about those sexual gestures and provocations?

Rainbow Lounge owner J.R. Schrock said claims that patrons made sexual advances to the officers and that one patron groped an officer were lies.

"The groping of the police officer - really? We're gay, but we're not dumb," Schrock said to the crowd that gathered at the bar Sunday afternoon. "That is a lie, and I am appalled by it.

A rally was held yesterday at the Tarrant County Courthouse. Click over to the Voice to see the photos. Thanks to the numerous Blenders who sent tips in about this incident.

* MSM coverage by The Fort Worth Star-Telegram
* Report by The Dallas Observer
* Also see TruthandLove's diary - it has plenty of links.
* DKos: Breaking: Raid on Fort Worth Gay Bar
* There is also a Facebook page

In North Carolina, commemorating an innovative strategy in the war on poverty