Skip to main content
Join the voice for a changing South.
Donate Today
By Desiree EvansJune 10, 2009

The first week of hurricane season was filled with news reports documenting the varying ways hurricane-prone states, as well as local officials, are addressing the issues of preparedness. Across the Gulf Coast, advocates are also hoping to see more changes at the federal level.

Craig Fugate, the new administrator for the Federal Emergency Management Agency, told a U.S. Senate subcommittee hearing on disaster preparedness last week that FEMA plans on clearing up agency rules for local and state governments to better handle a disaster. He also said communities cannot solely rely on the the Robert T. Stafford Act, the federal law that governs disaster recovery, in the wake of a disaster. The federal and local governments must form a partnership with the agency, he said.

Policy groups are also weighing in about reform at the federal level. The Rockefeller Institute of Government released a report last week calling for legislative change that would authorize a presidential appointee to take charge of the government's response to major disasters like Hurricane Katrina.

The report, Who's in Charge? Who Should Be? The Role of the Federal Government in Megadisasters: Based on Lessons Learned from Hurricane Katrina, suggests amending the Stafford Act so that it better serves those impacted by disaster, creating a central body or governmental leader -- an "officer-in-charge" -- with the authority to make plans actionable at a federal level in order and to better coordinate federal, state and local governments' response to a large-scale disaster. This person would report directly to the president after a "megadisaster" and could "enable the president and the Congress to consider extraordinary national action."

The Stafford Act is the legislation governing the federal response to disasters within the United States. The act spells out - among other things - how disasters are declared, the types of assistance to be provided, and the cost sharing arrangements between federal, state and local governments. 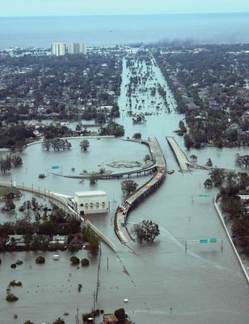 For years policy advocates have called for an overhaul of the Stafford Act, the primary law that also governs the Federal Emergency Management Agency's role in responding to disasters. Policy advocates say that amending the Stafford Act will better serve people in the wake of disaster. Following the disastrous federal response to Hurricane Katrina, this call to action became even more urgent.

As the Louisiana Family Recovery Corps pointed out in a recent statement, the Stafford Act was not designed to deal with massive disasters, and it has ultimately retarded recovery in Louisiana and other states. According to the Recovery Corps, "the rigidity of the Act and its voluminous amendments has certainly served to handcuff those federal agents, officers, and agencies working under its oversight."

To tackle this issue, the Rockefeller report argues that the rigidity must change and allow for a new federal designee who can make decisions based on real-time information on the ground and have the authority to press the president and Congress into taking immediate action. "When disaster strikes, plans often merge in such profusion, both for the relative near-term and the longer-term, that they delay progress and complicate governmental operations," the report states.

First, to provide the authority and resources to mobilize the federal establishment (and, by virtue of being able to do this, being in a stronger position to influence major institutions on the scene to get their act together). Second, to enable the national government to adopt extraordinary measures. A major charge to the person assigned as this "presidentially designated driver" would be to report to the president and the Congress within a prescribed period of time on whether extraordinary national action is needed, and if so what it should be. In doing so, the officer-in-charge and the staff of this office would draw on the expertise of federal, state, and local officials and agencies, voluntary groups, and outside experts.

Critics of the Stafford Act also argue that it needs to give FEMA greater latitude in how it responds to catastrophes as devastating as Hurricane Katrina. The assistance flowing from the Stafford Act has been inadequate following major disasters and unable to fulfill vital needs, human rights advocates argue. Reform advocates also call for more flexibility in providing cash assistance quickly -- particularly in the form of grants to states and localities, while also avoiding the type of bureaucratic red tape that has marred post-Katrina recovery efforts.

Following Hurricane Katrina local Gulf Coast officials said the "match" requirement in the Stafford Act - which said that affected communities had to pay a 25 percent match upfront before they can receive federal disaster fund - played a large role in the pace of recovery in the region. After Katrina, the White House reduced the match requirement to 10 percent, but it was still a hefty sum for devastated areas.

Some activists are also hoping to see changes to the Stafford Act to include a right to recovery and a right of return for disaster victims akin to what the United States and the United Nations call on other nations to provide their own displaced persons.