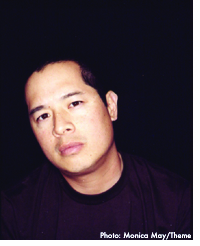 Long before anyone could read into Michael Jackson's cubist, etiolated face a work of performance art, the wounds of internalized racism, or the excess of boredom and wealth, all those things that would make us either look away or gawk, there was his voice.

The thing that Berry Gordy heard from the 10-year old boy was "knowingness", he said, "feeling, inspiration, and pain". There was an early protest song, "The Young Folks", that now seems telling. But as time went on, Gordy and his songwriters gave Michael songs in which loss loomed large, the better to exploit that glorious instrument of his. And for that voice, he lost his childhood.

Or more precisely, he gave it to us. Many of his most affecting performances were about distance and displacement, the desire to be somewhere else, the inability to return to a lost past. Think of the songs that the hip-hop generation adored so much: "I'll Be There", "I Wanna Be Where You Are", "Who's Loving You", "Maybe Tomorrow", "All I Do Is Think Of You", "Ready Or Not". On these songs, Michael's "knowingness" sounds more like fragility. (On the other hand, but hardly balancing the scale, is the joyous Bronx summer break of "It's Great To Be Here".)

If you want to wonder how ambivalent this boy-dream, this incarnation of all our notions about youth and beauty, felt about the limelight and wanting to be "normal", listen to him sing "Got To Be There". When he sees the girl of his desire walk into the morning light, it's as if he has transferred the shine away from himself to her, imagining a perfect love above the blood and grind of the daily celebrity-making machine. When he hits that high "me" (matched later by the word "home"), he has given all of it up to all of us.

But as an audience, we were insatiable and ruthless. Years later, after the satisfaction and ease of his 20s, after he had been broken by self-mutilation and bizarre scandal in his 30s, Michael Jackson would reveal a tragic, pathetic emptiness, pleading, "Have you seen my childhood?" By then, many of us had either turned away or turned on him. The transaction was done.

In the end, he lost even his voice, autotuned first by lawyers and other keepers of his dissipating wealth, consumed by Mickey Mouse-sounding paid-TV defenses and overproduced songs, before finally going silent forever. Time will restore the greatness of Michael Jackson's artistry. May it also cause us some revulsion at our complicity in his fall as well.

Jeff Chang writes frequently about culture, politics, the arts and music. A version of this story appeared on his blog Can't Stop Won't Stop and Salon.