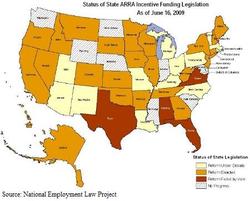 In a time of rising costs, increased unemployment, and declining wages, American workers could easily feel like they've been left to fend for themselves. Fortunately, because of incentives and funding included in the American Recovery and Reinvestment Act, as a new National Employment Law Project report details, states across the country have enacted measures to make it easier for unemployed Americans to obtain unemployment insurance (UI) benefits.

Progress this session includes:
This historic expansion and reform of unemployment insurance serves as a model for how state and federal government can best collaborate, with initial state experiments creating model legislation, the federal government then providing financial support for other states to emulate those models, followed by state campaigns to help spread those best practices to other states.