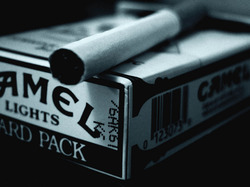 A recent study published in the New England Journal of Medicine found that major U.S., Canadian and British life and health insurance companies are investing billions of dollars in tobacco company stock.

Researchers first revealed that health and life insurance companies had major investments in tobacco companies in 1995 in an article in the British medical journal Lancet. More than 10 years later, insurance companies are still deeply invested in "big" tobacco, despite the national calls upon them to divest.

"Despite calls upon the insurance industry to get out of the tobacco business by physicians and others, insurers continue to put their profits above people's health," said Wesley Boyd, the new report's lead author and a faculty member of Harvard Medical School. "It's clear their top priority is making money, not safe-guarding people's well-being."

The report found that seven health and life-insurance companies in both the United States and overseas have nearly $4.5 billion invested in companies whose affiliates produce cigarettes, cigars and chewing tobacco.

"Although investing in tobacco while selling life or health insurance may seem self-defeating, insurance firms have figured out ways to profit from both," Boyd said. "Insurers exclude smokers from coverage or, more commonly, charge them higher premiums. Insurers profit -- and smokers lose -- twice over."

Health advocates point out that these private, for-profit insurers have repeatedly put their own financial gain over the public's health. "It's the combined taxidermist-and-veterinarian approach: either way, you get your dog back," study co-author David Himmelstien explained. "If you own a billion dollars [of tobacco stock], then you don't want to see it go down, you are less likely to join anti-tobacco coalitions, endorse anti-tobacco legislation, basically, anything most health companies would want to participate in."

Moreover, healthcare advocates point to this study as another reason why health insurance coverage should not be left in the hands of private insurers. Himmelstein asked, "Is this who we want running our health care system?"

Worldwide, tobacco is considered the leading cause of lung cancer and a major risk factor for heart attack, stroke, pulmonary disease and cancer. It is the leading cause of preventable deaths, and the leading cause of cancer deaths among men and women, according to U.S. and world health officials. Each year, about 443,600 people in the United States die from tobacco-related illnesses, and worldwide it is a contributing factor in 5.4 million deaths a year. Tobacco kills more Americans than alcohol, car accidents, suicide, AIDS, homicide, and illegal drugs combined, according to the American Cancer Society.

Tobacco is an issue that the South knows a lot about, considering the region's historical dependence and ties to the tobacco industry. Experts have shown that strong economic and cultural ties to tobacco in the South have often correlated with high rates of tobacco use. While cigarette consumption has been declining and is expected to continue to decline nationwide, the consumption of smokeless tobacco - snuff and chewing tobacco - has actually increased over the past decade, especially in the South. Several Southern states lead the nation in smokeless tobacco use, including West Virginia, Alabama, Kentucky, North Carolina, South Carolina, Tennessee and Mississippi. Yet, research has shown that smokeless tobacco can be just as dangerous as cigarette smoking. Not only can it lead to mouth cancer, smokeless tobacco may also play a role in other cancers, heart disease and stroke.

Several of the Southern states that lead in smokeless tobacco use and have traditional ties to the tobacco industry also comprise what health experts have come to refer to as the "stroke belt" - a swath of states that include North Carolina, South Carolina, Georgia, Tennessee, Alabama, Mississippi, Arkansas, and Louisiana. Americans living in this region have a 15-percent higher stroke risk, and the death rate from stroke is 30 to 40 percent higher than in the rest of the country. Health experts suspect that tobacco use could be one of the contributing behaviors leading to these high rates.

This has been an exciting week for health advocates. Sweeping changes in how the government controls tobacco are likely to be approved by the Senate despite strong opposition from tobacco interests and the tobacco lobby. The U.S. Senate is set to vote on new laws that for the first time will permit the Food and Drug Administration to regulate the production, sale, and marketing of tobacco products, including limiting how much nicotine is in each cigarette, and banning advertising and marketing aimed at children.

Tobacco regulation has been a long, hard fought for cause due to the power and influence of "big " tobacco and its lobby. Congress has been trying for more than a decade to give the FDA powers over tobacco products, particularly after a 2000 Supreme Court decision that the FDA could not regulate tobacco unless Congress changed the law.

A final vote on the bill is expected Thursday, and Democrats say they have enough votes to win final passage. The House passed a very similar bill earlier this year, and resolution of the minor differences would send the bill to President Obama, who supports it. The lone Democrat voting against the move to end debate on the bill Wednesday was Senator Kay Hagan, the newly elected official from North Carolina, one of the historically recognized tobacco growing states.

Supporters of the legislation, including health advocacy groups, have linked reducing the financial costs of tobacco illnesses, about $100 billion a year, to the overall drive to improve the healthcare system. The bill's opponents have voiced concerns that the changes could prove costly in tobacco-growing states such as Kentucky and North Carolina.

Single-Payer Off the Table?

A step forward and a step back, some say. While health advocates celebrate the changes in tobacco laws, the health reform debate of the last couple of months has instead left health advocates with much to be desired.

Currently, the Obama Administration is pushing Congress to pass a healthcare reform bill by the end of the year that would cover most of the nation's 47 million uninsured. As Reuters reported:


Obama has declared this summer "make-or-break" time for healthcare reform and has called on Congress to pass comprehensive legislation by the end of the year, saying America can no longer afford the costs of a system dominated by profit-driven insurance and healthcare companies which leaves 46 million people uninsured.

Though he is leaving the details to Congress, Obama has said reform must ensure a public health insurance option operating alongside private plans, a reduction in basic costs, and assurance that no one is denied insurance.

But healthcare reform advocates are upset that lawmakers have taken a "single-payer" plan off the table. For years health advocates have been calling for a government-financed nationalized health plan - in the form of single-payer legislation. Even though most physicians, health officials and health advocates support single-payer legislation, the option has been excluded from the current debate in Congress. In a single-payer system, as envisioned by most advocates, the federal government would pay for basic medical care delivered by public and private health professionals. The money would come from taxes, and medical bills would go directly to a government insurance plan, similar to Medicare.

Last month, single-payer advocates took to the streets across the country to protest the exclusion of single-payer medical plan from the debate to revamp the nation's troubled health system. During Senate Finance Committee hearings in May, 13 doctors, nurses, lawyers and activists stood up to complain that no single-payer proponent had been invited to take part and were arrested for disrupting the proceedings.

The Harvard doctors involved in writing the recent study published in the New England Journal of Medicine also support a single-payer plan and point to their report as just another reason why health insurance coverage shouldn't be left in the hands of private insurers. Boyd and his colleagues also believe that their findings call into question whether insurers ought to have a voice in the ongoing debate in Washington over healthcare reform.

As they write in their letter published in NEMJ:

"The Obama administration is proposing a major overhaul of the U.S. health care system, and the insurance industry is poised to play a major role in the process. Insurance firms, like any business, are driven by profit, and this fact compromises any health care plan that includes them. In case there is any doubt that insurers place profit above health, consider their investments in tobacco.
...
These facts should discomfit Canadian and British readers as their countries consider further privatization of health insurance. For those of us in the United States, these data are a reminder of the true priority of the insurance industry, which is making money, not ensuring health and wellbeing. These data raise a red flag about the prospect of opening vast new markets for private insurers at public expense, as has happened in our state of Massachusetts, whose recent health care reform is often cited as a model for national reform.

Not only have health insurers and drugmakers contributed millions of dollars to members of Congress, but the powerful private health insurance lobby, along with other corporate and political interests, have been derailing efforts at healthcare reform for years. Observers say this intense lobbying is likely the reason the single-payer option has been largely dismissed from the healthcare reform debate.

Currently Democrats are debating several alternative options for "public" plans, some of which could include a government-financed purchasing pool that people could buy as an alternative to individual health policies offered by private insurers. Private insurers would play a role in all of the proposed plans.