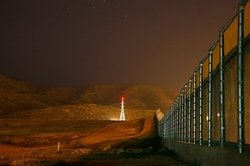 A legal challenge in the U.S. Supreme Court to the construction of the U.S.-Mexico border wall was declared dead Monday. The justices declined to hear an appeal by the County of El Paso, Texas, to an earlier decision by a U.S. federal court judge that allowed the Bush administration to proceed with construction of the controversial wall.
"This decision now ends our pursuit of this case," said El Paso County Attorney Jose Rodriguez in a statement. "El Paso County would very much like thank Mayer Brown LLP of Washington, D.C., for their defense and support in this case. Mayer Brown litigated this case without any cost to the county."
The El Paso case grew out of former Department of Homleand Security Secretary Michael Chertoff's waiver last year of more than 30 federal, state and local laws to speed up construction of border fencing in El Paso County, Texas, among other locations. Arguing that Secretary Chertoff did not have the statutory authority to issue the waivers, El Paso County and several co-plaintiffs filed suit against the federal government last June.
Lawyers for El Paso County later went to the Supreme Court to appeal a September 11, 2008 ruling by US District Court Judge Frank Montalvo that upheld Secretary Chertoff's presumed authority. Although his case did not prevail, Rodriguez said he was optimistic that the Obama Administration will consult with local communities on the fence and other border security issues.
According to Elhiu Dominguez, public affairs officer for El Paso County, Rodriguez and other local leaders recently met with border czar Alan Bersin. "They are talking to the Department of Homeland Security," Dominguez said.
Now almost finished, the controversial, 670-mile border fencing project has drawn opposition from a host of communities and entities on both sides of the border.
Opponents argue that costly fencing will cause environmental harm, disturb sacred Native American sites, send a wrong message to a friendly southern neighbor and result in more deaths of would-be illegal border crossers who will be detoured into more hostile zones. South of El Paso, the new fencing runs along the edge of Rio Bosque Wetlands Park, a refuge for migratory birds and other wildlife.
Border wall proponents, on the other hand, insist walling off the U.S.-Mexico border is necessary to keep out contraband, immigrants and terrorists. Besides El Paso County, other co-plaintiffs in the ultimately unsuccessful suit against Chertoff included the City of El Paso, the El Paso County Water Improvement District No.1 and Ysleta del Sur Pueblo, among others.
While the Supreme Court never actually ruled on the merits of the lawsuit, the high court's non-action on an important constitutional matter contains many implications for the ability of the executive branch to override congressional laws in the pursuit of defined interests of national security.
Copyright © New America Media

VOICES: I quit the NC State Bar for serving power instead of the people